The L.A. Riots Were 30 Years Ago. I’m Still Trying to Understand Them. 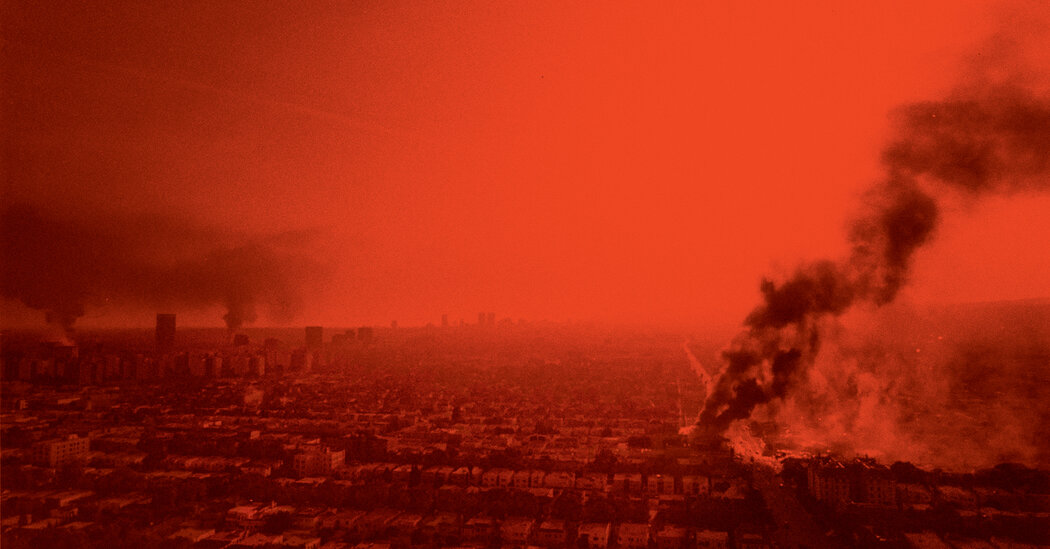 Some white families left Wilson, but more stayed. Even as nearby neighborhoods were becoming more Latino, the old, sprawling campus had not lost its cachet with those white families. Wilson alumni included an astronaut and athletes who competed at the summer Olympic Games for every U.S. team going back to Helsinki in 1952. And for the students of color, who longed for something better than the prejudice and inequality that life had handed them, the sprawling Wilson campus and its old buildings were an island of order and possibility.

By 1992, Woodrow Wilson High presented a vision of what Southern California aspired to be. The yearbook was called a Kaleidoscope of Changes. In its pages, Black, white and Latino students run together on the cross-country team and line up for a portrait of the varsity football squad. The children of Southeast Asian immigrants swing rackets on the badminton team. The Black and white members of the choral club sang the Paul McCartney and Stevie Wonder hit “Ebony and Ivory”: “We all know that people are the same wherever you go. … /Ebony and ivory/live together in perfect harmony.”

The now-middle-aged alumni describe a large campus where, on most days, there was a relatively calm relationship among racial groups, with few overt tensions. The Black students hung out at the media center and the white students at the rally stage, though it wasn’t unheard-of for a kid from one group to wander over and talk to a kid in another. Wilson High “wasn’t Orange County white bread with the crust cut off,” remembers Greg Darling, who is white and was a senior at the time of the supposed brawl. He mastered Spanish at Wilson, in its classrooms and with friends. When he went to the University of Southern California after graduating and met some of the wealthier white students there, he was surprised by how sheltered they were. At Wilson, he had seen just how interesting, and complicated, being an American could be.

Herman Rodriguez, the son of Mexican immigrants, took a city bus on a six-mile trip to Wilson, the landscape becoming greener and more affluent the farther he traveled, until he arrived at the pleasant middle-class neighborhood surrounding the school. He recalled living in a “very ghetto” triplex in Long Beach’s Westside, a neighborhood where it wasn’t uncommon to hear gunfire on the weekends. “Coming home, I got jumped by my own neighborhood gang a couple of times,” he says. “Short, little Hispanic kids. They get together and think they’re tough. Five against one. I had to run away.”

Wilson was his haven. “You could take your Walkman, you could dress how you want.” There were no school uniforms, and the gang members on campus didn’t harass him. His parents moved to Long Beach to escape the more serious gang problems in Boyle Heights, in L.A.’s Eastside. “At that time my parents thought about white people as respectful, clean. Nonracist. Hardworking.” They sent him to Wilson, expecting “less drama.”

When Phan Nguyen, a Vietnamese immigrant, first arrived, Wilson teachers assigned Vietnamese-speaking students to guide him through his school day, helping him learn the rules of the American classroom. In his eyes, the campus was a “fantasy world” of football, marching bands and cheerleaders wearing matching sweaters. He was a smart kid who grew up in Ho Chi Minh City, attending schools where Communist severity and traditional Vietnamese mores shaped everyday behavior. At Wilson, “I saw a couple of kids kissing on the campus,” says Nguyen, now a doctor in Orange County. “In Vietnam, that was unheard-of.”

Dolores Villalvazo’s family immigrated to Long Beach at the start of her ninth-grade year. She arrived in Southern California after a dayslong drive from Guadalajara, Mexico, and her English was nonexistent. With no campus clique to join, Villalvazo spent her school breaks alone in an upper-story hallway between school buildings. From this perch, she could study the student body below her with anthropological curiosity. She saw how the white, Black and Latino kids moved in distinct groups, and how the better-off Black students seemed to be in a separate circle from the students who were as poor as she was. Sterling Perry also noticed the cliques. “It was what it was,” he says. “Nobody tripped off of it.”