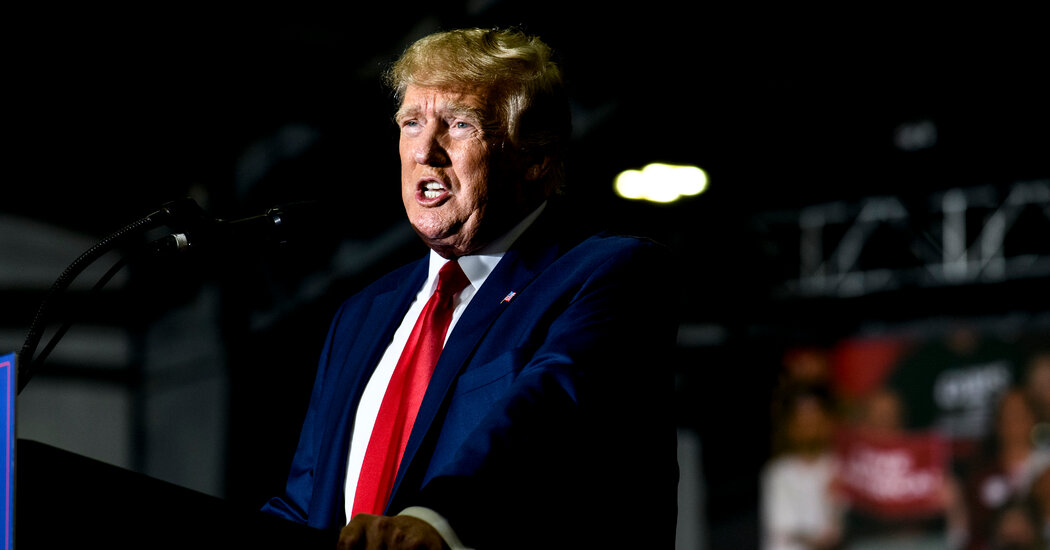 When some two dozen New Yorkers filed into a Manhattan courthouse this week to finish out their grand jury service, the case against a man who would have been the world’s most prominent criminal defendant was no longer before them.

That man, Donald J. Trump, was facing potential criminal charges from the grand jury this year over his business practices. But in the weeks since the Manhattan district attorney, Alvin L. Bragg, stopped presenting evidence to the jurors about Mr. Trump, new signs have emerged that the former president will not be indicted in Manhattan in the foreseeable future — if at all.

At least three of the witnesses once central to the case have either not heard from the district attorney’s office in months, or have not been asked to testify, according to people with knowledge of the matter.

In recent weeks, a prosecutor at the Manhattan district attorney’s office who played a key role in the investigation has stopped focusing on a potential case against Mr. Trump, other people with knowledge of the inquiry said — a move that followed the resignation of two senior prosecutors earlier this year.

And the remaining prosecutors working on the Trump investigation have abandoned the “war room” they used to prepare for their grand jury presentation early this year, the people said, leaving behind an expansive office suite and conference room on the 15th floor of the district attorney’s office in Lower Manhattan.

The grand jury’s expiration at the end of the month does not preclude prosecutors from impaneling another jury, but the developments underscore the reduced possibility that Mr. Trump will face charges under Mr. Bragg, who along with several other prosecutors had concerns about proving the case. Some people close to the inquiry believe that it will not result in an indictment of the former president unless a witness cooperates unexpectedly — a long shot in an investigation that has been running for more than three years.

In recent weeks, Mr. Bragg’s prosecutors have issued a few new subpoenas that indicate they are continuing to investigate but have not found a new path to charging Mr. Trump. The previously unreported subpoenas, people with knowledge of the matter said, appear to focus on the same topic that has long been the subject of the investigation: whether Mr. Trump falsely inflated the value of his assets in annual financial statements.

The subpoenas suggest that, rather than pursuing a new theory of the case, Mr. Bragg is looking at additional entities that received Mr. Trump’s financial statements as the former president’s company sought loans and pursued other business, and that the prosecutors are seeking potential victims of the former president.

One of the subpoenas went to a major financial institution that may have received Mr. Trump’s financial statements. A second subpoena sent to the Trump Organization largely followed up on an earlier demand to the company for records related to the value of his properties. And the third went to the New York City agency that tracks municipal vendors, including Mr. Trump, who has done business with the city for years, operating a golf course in the Bronx and an ice rink in Central Park.

In an interview this month, Mr. Bragg said that his prosecutors were interviewing new witnesses and looking at new evidence. He declined to provide details, citing grand jury secrecy law, but said that the inquiry must be allowed to run its course.

“It’s a work in progress,” Mr. Bragg said, adding later, “We’ve got seasoned prosecutors working every day. It’s not going to be on a timeline.”

But impaneling a new grand jury could create challenges for any potential case. Mr. Trump’s lawyers could argue — and a judge might agree — that prosecutors were inappropriately hunting for a more favorable group of jurors.

It would also take time to prepare a new presentation of evidence and months to lay out a case to jurors.

Mr. Bragg’s office does not have unlimited time to charge Mr. Trump. Witnesses could forget key information. Prosecutors would also face a deadline to file the charges within five years of any crimes being committed, though there are some exceptions that extend the deadline. And were Mr. Trump to announce another presidential run, Mr. Bragg would be likely to face political pressure not to indict a leading contender for the White House.

At a court hearing on Monday — during which a judge held Mr. Trump in contempt of court for failing to fully comply with a subpoena for records from Ms. James — a lawyer from her office said that the attorney general would probably take action against the former president in the near future. Because her investigation is civil, Ms. James can bring a lawsuit, but not criminal charges.

Mr. Trump has long denied wrongdoing and accused Ms. James and Mr. Bragg, both of whom are Black and Democrats, of being politically motivated “racists.” If he ultimately is sued or indicted, his lawyers would be likely to point toward the disclaimer that his financial statements were not audited by his accountants and that they were submitted to sophisticated financial institutions that conducted their own due diligence.

In December, Mr. Vance directed the two senior prosecutors leading the criminal inquiry, Mark F. Pomerantz and Carey R. Dunne, to present evidence to a grand jury with the goal of seeking an indictment of Mr. Trump.

But when Mr. Bragg took office this year, he and several of his aides raised concerns about the strength of the case, questioning whether they could prove that Mr. Trump intended to break the law. Other prosecutors in the office had raised similar concerns, people with knowledge of the matter said. In the final months of Mr. Vance’s tenure, three assistant district attorneys stopped working on the investigation, concerned about how rapidly it was proceeding and what they felt were gaps in the evidence against the former president.

Mr. Bragg eventually decided to halt the grand jury presentation, prompting the departure of Mr. Dunne and Mr. Pomerantz, who stated in his resignation letter that he believed Mr. Trump was “guilty of numerous felonies.”

Numerous inquiries. Since former President Donald Trump left office, there have been many investigations and inquiries into his businesses and personal affairs. Here’s a list of those ongoing:

Just weeks after their departure, Solomon Shinerock, one of the key prosecutors on the team, stopped investigating Mr. Trump. Mr. Shinerock, who for years was the lead assistant district attorney in the investigation, pulled back in part because it appeared to be winding down, two of the people familiar with the inquiry said.

While Mr. Shinerock is not investigating Mr. Trump, he is still working on a Trump-related case. In July, Manhattan prosecutors indicted the Trump Organization and its longtime chief financial officer, Allen H. Weisselberg, accusing them of a yearslong tax evasion scheme.

Mr. Shinerock is playing a central role in preparing for that trial, and, given that role, is participating in meetings where the investigation into Mr. Trump is discussed, a person with knowledge of the meetings said.

In the interview this month, Mr. Bragg said that no one had left the Trump team since Mr. Dunne and Mr. Pomerantz. Asked this week to clarify his remarks, Mr. Bragg’s spokeswoman stood by them, saying that there was one “dedicated team working on the indicted tax case and the Trump investigation.”

The team is led by Susan Hoffinger, an experienced prosecutor whom Mr. Bragg appointed to lead the office’s investigations division.

The spokeswoman, Danielle Filson, said in a statement that the team included “lawyers who have worked on the case for years and skilled new prosecutors with decades of experience and fresh eyes.”

She declined to say how many prosecutors and other staff are assigned to the team investigating Mr. Trump, but said it was “actively probing unexplored avenues.”

In the early days of Mr. Bragg’s tenure, the core members of the Trump team took over a 15th-floor conference room as they pushed ahead with the presentation of evidence about the former president to a grand jury. But since the resignations of Mr. Pomerantz and Mr. Dunne, the team has abandoned that room — an indication, veterans of the office say, that the case is not headed toward a grand jury anytime soon. The team members are now sitting in offices in the Major Economic Crimes Bureau.

Mr. Bragg has told aides that the inquiry could move forward if a new piece of evidence is unearthed, or if a Trump Organization insider decides to turn on the former president, people with knowledge of the conversations said. Under Mr. Vance, the prosecutors tried for months to secure the cooperation of Mr. Weisselberg and were unsuccessful.

Mr. Pomerantz and Mr. Dunne had been considering charging Mr. Trump with the crime of falsifying business records, a low-level felony. Asked if he was still considering that charge, or charges relating to the possibility that Mr. Trump had inflated the value of his assets on his financial statements, Mr. Bragg said that prosecutors were looking at new evidence and seeing how it fit into the overall picture.

But Mr. Pomerantz warned in his resignation letter that time was of the essence, noting, “These facts are already dated, and our ability to establish what happened may erode with the further passage of time.”