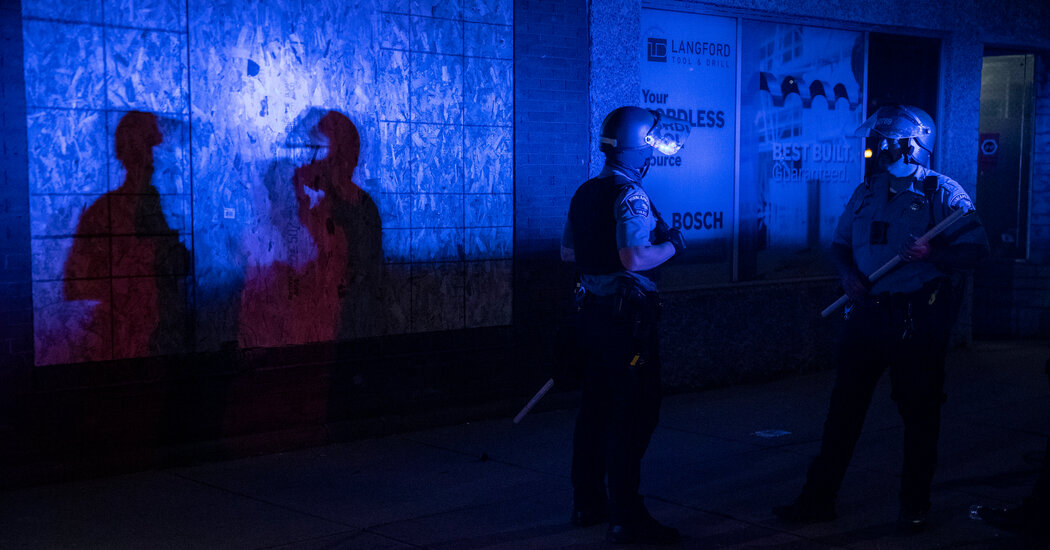 The Minneapolis Police Department routinely engages in several forms of racially discriminatory policing, fails to hold officers accountable for misconduct and has used fake social media accounts to target Black people and organizations, according to a damning investigation released on Wednesday by the state’s Department of Human Rights.

The department has a “culture that is averse to oversight and accountability,” and city and department leaders have failed to act with “the necessary urgency, coordination and intentionality required” to correct its extensive problems, the investigation concluded.

The Minneapolis police have been under intense scrutiny since cellphone cameras captured the murder of George Floyd, a Black man, by a police officer during an arrest on May 25, 2020. The state’s human rights investigation began about a week later. The department is also under a similar investigation by the federal Justice Department.

Both investigations could result in consent decrees, agreements that are overseen by monitors and enforced by the courts. Such agreements generally include a long list of required changes, benchmarks and timelines. The state human rights department is seeking public comment on what such a consent decree should include.

One of the report’s most vivid findings, based on interviews and a review of 700 hours of body camera footage, was an exhaustive list of slurs that officers and supervisors “consistently use” against women and Black people, including suspects, witnesses, bystanders and their own colleagues.

The disrespect was so flagrant that local prosecutors said it was difficult to present body camera videos to juries, according to the report: “When M.P.D. officers scream obscenities at community members, it makes it challenging for prosecutors to do their job.”

At a news conference on Wednesday afternoon, Mayor Jacob Frey called the report “repugnant” and “at times horrific.” He said a host of previous reports and investigations had too often not been followed by action. “This time it needs to be different,” he said.

Two Black city officials, LaTrisha Vetaw, a member of the City Council who is helping lead the search for a new police chief, and Saray Garnett-Hochuli, the director of regulatory services, said the findings came as no surprise to them.

The investigation found that officers stopped, searched, arrested, ticketed, used force on and killed Black and Indigenous people at a higher rate than white people. Although Black individuals make up about 19 percent of the population, in 10 years of data, 63 percent of the instances where officers recorded the use of force were against Black people, the report said.

The department did not have enough data to look at treatment of other racial and ethnic groups, Rebecca Lucero, the state human rights commissioner, said at a news conference.

Officers used covert social media accounts to observe and engage with elected officials, Black individuals and organizations, though the people and groups were not suspected of any crimes, with officers at times posing as community members to make comments. In one instance, the report said, an officer posed as a Black resident to send a message criticizing the N.A.A.C.P. In other cases, officers posed as residents to criticize elected officials.

Fake accounts are supposed to be used for investigative purposes only, approved by a supervisor and registered in a department inventory, though investigators found at least two dozen accounts in use that were not listed in the inventory. The department did not use covert accounts to similarly surveil white people or white supremacist groups for possible criminal activity, the report said.

Mr. Floyd was killed after two rookie officers responded to a call that he had used a counterfeit $20 bill at a convenience store. Mr. Floyd declined to get into the squad car. A field training officer, Derek Chauvin, and his partner arrived to provide backup. Mr. Chauvin forced Mr. Floyd to the pavement and knelt on his neck for more than nine minutes, while his partner stood guard and the two rookies helped pin Mr. Floyd down.

Mr. Chauvin was convicted of murder and pleaded guilty to federal civil rights violations. The three other officers have been convicted of failure to intervene or provide medical aid and still face state charges of aiding and abetting murder and manslaughter.

Although field training officers like Mr. Chauvin have tremendous sway over rookies, the department does not offer ongoing instruction for them, the investigation found — an oversight that it said “furthers race-based policing.” It cited a 2020 case in which a training officer allowed a trainee to search a Black woman who was unarmed, but said that searching an intoxicated white man who admitted to having a knife in his bag would be a waste of the trainee’s time.

The report suggested that the department still fails to empower officers to intervene when they see something wrong. On the first day of training in 2021, the report said, recruits were told that “instant and unquestioned compliance is in order.”

That attitude trickles down — Minneapolis police officers demand unquestioned compliance in “even the most banal interactions,” community members told investigators. More than 2,000 residents were interviewed.

The report said that although the department banned warrior-style training, it still established a “warrior mind-set” in new officers.

City officials said that some of the issues raised in the report have already been addressed. The department has begun peer intervention training for all officers, hired a specialist to improve training and added investigators to work on police misconduct complaints. The interim police chief, Amelia Huffman, said she was putting into place an additional review of incidents where force was used.

Mayor Frey has touted numerous policy changes since the killing of Mr. Floyd, including banning chokeholds and neck restraints and updating the department’s use-of-force policy.

But officers reported that they in some cases had to wait a year or more to hear the details. In the case of the new use-of-force policy, which includes the limits on restraints, investigators found that officers were provided with only a 15-minute “narrated PowerPoint presentation” on the changes.

The department lacks adequate accountability measures from top to bottom, the investigators found. They said that more than a third of officers who were referred for coaching, the least severe form of intervention, did not receive it, and that supervisors failed to flag excessive uses of force. In a sampling of 300 use-of-force reports, more than one in five contained evidence that contradicted the officer’s account of what happened, investigators said.

The report cited a 2017 case in which an officer hit an unarmed 14-year-old in his bedroom with a flashlight and choked him unconscious, all because the teenager did not stand up quickly enough when ordered to do so. A supervisor approved the officer’s actions.

The officer involved was not identified, but the dates, age of the victim and description of the event match an episode for which Mr. Chauvin pleaded guilty to a civil rights violation last year.

The report said the entities responsible for investigating misconduct often failed to review body camera footage or interview witnesses. It said that the department’s internal affairs unit handled a quarter of complaints improperly, while the Office of Police Conduct Review, which includes civilian investigators, mishandled half of the complaints it investigated.

Members of the Police Department are involved in virtually every disciplinary process used, the report said. “No meaningful independent review process exists for assessing M.P.D. officers’ conduct,” the report said.

The report found that officers frequently failed to de-escalate situations involving people of all races, or even escalated them, often leading to an unnecessary use of force. In one example the investigators cited, officers handcuffed a white man to take him to a hospital, then mocked him. The man, who had been compliant, kicked at them, and one officer punched him repeatedly in the face.