At Madeleine Albright’s Funeral Service, a Reminder of the Fight for Freedom 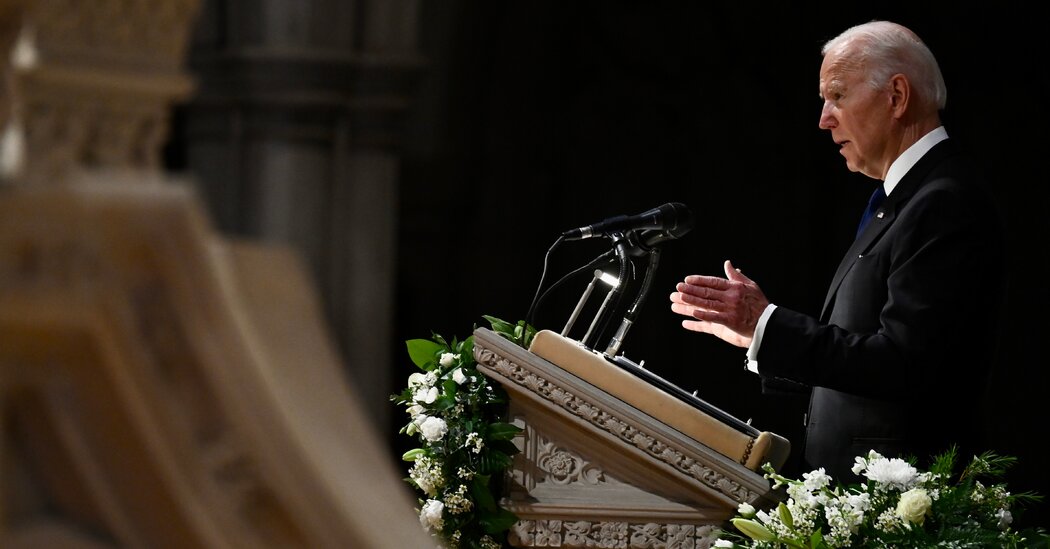 The matriarch of the Democratic foreign policy establishment in Washington, she also left her mark on the next generation, which was on display in a cathedral filled with people who considered her a mentor or guide, including the current secretary of state, Antony J. Blinken, and his deputy, Wendy R. Sherman.

Ms. Albright was the third former secretary of state to die in just over a year, after George P. Shultz and Colin L. Powell. Indeed, one of her last public appearances was delivering a funny, poignant and affectionate eulogy for Mr. Powell in the same cathedral in November.

As serious as her professional mission was, Ms. Albright was also one of Washington’s great characters. She was famous for her many pins, often worn to showcase a cause or send a message. When other ambassadors filibustered, she would wear a snail pin to demonstrate her impatience. Mrs. Clinton wore an angel pin on Wednesday in her honor. Her three daughters wore dove pins.

Ms. Albright had a wry sense of humor. As her eulogists recounted, she once taught the foreign minister of Botswana how to dance the Macarena at the United Nations Security Council and on another occasion skipped out early from an official event in Buenos Aires to dance the tango. She was invited to compete on “Dancing With the Stars,” although she declined. “She tore up the dance floor at Chelsea’s wedding,” Mrs. Clinton noted.

But she was tough too, all five feet of her, if that truly was her height, which Mrs. Clinton said she doubted. At one point, Ms. Albright boasted publicly that she could leg press 400 pounds, stirring all sorts of commentary.

Ms. Albright had a long relationship with the cathedral. All three of her daughters attended the Beauvoir School and graduated from the National Cathedral School, which are both affiliated with the cathedral, and she led the Beauvoir board of directors in the 1970s, an experience she said taught her about politics. At the time of her death, Ms. Albright served on the Cathedral chapter, the institution’s governing board.

In a joint tribute, her daughters presented her human side. Anne K. Albright recalled that once during a trip to the Balkans, her mother was attacked by rock-throwing Serbs angry at her for standing up to Serbia’s authoritarian leader, Slobodan Milosevic. Soon after she returned home, T-shirts were made: “I Got Stoned With Madeleine Albright.”