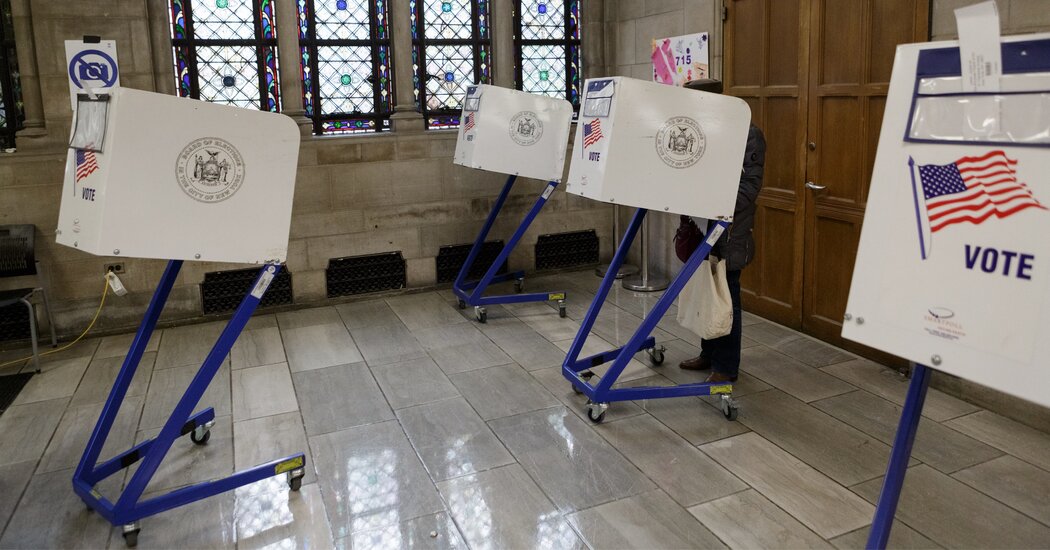 New York’s highest court ruled on Wednesday that Democratic leaders had violated the State Constitution when they took it upon themselves to draw new congressional and State Senate districts, and ordered that a court-appointed special master draft replacement lines for this year’s critical midterm elections.

In a sweeping 32-page ruling, a divided New York State Court of Appeals chided Democrats for ignoring a constitutional amendment adopted by voters in 2014 to curb political influence in the redistricting process. The amendment also created a new outside commission to guide the process.

The judges additionally found that the congressional districts designed by Democrats violated an explicit state ban on partisan gerrymandering, undercutting the party’s national campaign to brand itself as the champion of voting rights.

Writing for the four-judge majority, Chief Judge Janet DiFiore said that Democratic lawmakers created congressional and State Senate maps in a way that was “procedurally unconstitutional,” and that the congressional map in particular was “drawn with impermissible partisan purpose.”

The ruling, which is not subject to appeal, was expected to delay the June 28 party primaries for the congressional and State Senate districts until August, to allow time for new maps to be drawn and for candidates to collect petitions to qualify for the ballot.

The verdict delivered a stinging defeat to Democrats in Albany and in Washington and cast this year’s election cycle into deep uncertainty.

Party leaders had been hopeful that the Court of Appeals, with all seven judges appointed by Democratic governors, would overturn earlier decisions by a Republican judge in Steuben County and a bipartisan appeals court in Rochester.

Instead, the high court issued an even more damning verdict that denied the Democrat-dominated State Legislature a chance to redraw the maps itself. That task, the judges said, should be handled by a politically neutral special master, who would be overseen by a trial court.

National Democrats had been counting on the New York congressional maps adopted in February to deliver as many as three new seats this fall and offset redistricting gains by Republicans across the country. Now, with Democratic gains likely to be erased or minimized in New York, Republicans are on track to make modest gains nationally, easing their path to retaking control of the House of Representatives this fall.

Democrats were likewise expecting the State Senate maps they adopted in February to help safeguard the party’s supermajority in Albany.

What to Know About Redistricting

Wednesday’s decision was a milestone in New York jurisprudence, the first time since the 1960s that the Court of Appeals has struck down district lines approved by lawmakers in their once-in-a-decade redistricting process.

But the ruling is part of a growing trend across the nation in which state courts have taken up more active stances against partisan gerrymandering as federal courts have been removed from these battles by the Supreme Court.

This year alone, state courts in Ohio, North Carolina, Kansas and Maryland have scrapped plans put in place by lawmakers because they ran afoul of state constitutional language outlawing partisan mapmaking, like that adopted by New York voters in 2014. The courts are widely expected to scrutinize new lines in Florida that overwhelmingly favor Republicans, as well.

“States can be the laboratories of redistricting reforms,” said Samuel Wang, the director of the Princeton Gerrymandering Project. “And this just goes to show that if a state court is willing to look carefully to its constitution and laws, it will find principals that can restrict the most extreme partisan acts.”

Unlike New York, though, some of those courts have indicated they will allow 2022 elections to take place on tainted maps, potentially putting Democrats at a greater disadvantage nationally.

The judges in New York were silent on whether to reschedule primary elections for other contested seats — including for governor, lieutenant governor and the State Assembly — leaving it to a trial court judge, Patrick F. McAllister, and the State Board of Elections to work out the details with “all due haste.” The board said Wednesday evening that it did “not foresee” moving those contests.

But the judges appeared to bless the idea of separating them, pointing out that New York has a history of holding bifurcated primaries. They were more explicit in rejecting Democrats’ plea to allow this year’s elections to proceed on tainted lines and fix them later.

“We reject this invitation to subject the people of this state to an election conducted pursuant to an unconstitutional reapportionment,” Judge DiFiore wrote in the majority opinion.

Justice McAllister has already appointed Jonathan Cervas, a postdoctoral fellow at Carnegie Mellon University, as special master to draw the congressional and State Senate lines by late May.

Gov. Kathy Hochul, a Democrat, said Wednesday afternoon that she was reviewing the decision. Michael Murphy, a spokesman for Senate Democrats, said they still “believe in the constitutionality” of their maps and plan to argue their case to the special master.

“The will of the people prevailed over the Corrupt Albany Machine in a tremendous victory for democracy, fair elections & the Constitution!” Representative Nicole Malliotakis, a New York City Republican, wrote on Twitter.

Ms. Malliotakis’s Staten Island-based district was among several that the Democrats’ congressional map would have made more challenging for Republicans, in her case by adding liberal voters from Park Slope in Brooklyn. The map also created new Democratic pickup opportunities on the eastern end of Long Island and in Central New York, and shored up Democrat-held swing seats in the Hudson Valley, by cramming conservative voters into just a handful of districts.

In total, the map would have given Democrats an advantage in 22 of New York’s 26 congressional districts, compared with 19 seats currently held by Democrats and eight by Republicans. New York is slated to lose one district overall after this year because it failed to keep up with population growth in other states, as documented by the 2020 census.

Now, the candidates in both parties are facing months of limbo over where to campaign and who their opponents may be. Some, like Alessandra Biaggi, a Democratic state senator representing parts of the Bronx and Westchester County, could find themselves outside the lines of districts they’ve already spent months competing in.

At least one Democrat, Max Rose, who is running against Ms. Malliotakis, claimed he was undaunted. “Our men and women in uniform both at home and abroad, they gotta deal with tough stuff,” he said in a brief phone interview. “New lines? C’mon.”

The legal fight over the 2022 redistricting cycle that culminated on Wednesday stretches back a decade, when the Democratic-led Assembly and Republican-controlled Senate failed to agree on how to craft a new congressional map.

Their short-term solution was to hand the drafting process over to the federal courts. But along with Gov. Andrew M. Cuomo they also crafted a longer-term response: a constitutional amendment creating a redistricting commission like those used in other states, and adopting specific anti-gerrymandering language. Voters approved the changes in 2014.

The problem began when the Independent Redistricting Commission, in its first efforts, broke down amid partisan infighting this winter. It presented the State Legislature with two conflicting sets of maps for consideration, rather than one unified vision, and then never followed up after lawmakers rejected its proposals.

Democratic lawmakers then used their supermajorities to pass maps far more favorable to their party without substantial Republican input.

In their challenge, Republicans argued that the Democrats’ maneuver was a violation of the new constitutional process, and the explicit gerrymandering ban.

Democrats disagreed. Their lawyers said that the Legislature had never forfeited its right to draw maps, and that the ones it produced were a good-faith effort balancing demands to preserve the cores of existing districts, keep together communities with shared interests, and adjust for population gains in left-leaning areas, and losses in conservative ones.

The Court of Appeals was unpersuaded on both questions. In her majority opinion, Judge DiFiore wrote that Democrats were asking the judges to “effectively nullify the 2014 amendments” and make the commission “nothing more than ‘window dressing’ masquerading as meaningful reform.”

The Assembly maps appear only to have survived because Republicans who brought the suit did not explicitly challenge them.

The judges’ evaluation of whether the maps were gerrymandered was more limited. They said they saw no compelling reason to reverse the lower-court rulings that Republicans had proven their case.

The Republican challengers succeeded despite never saying where they believed Democrats had mislaid lines. Instead, Republican lawyers relied on computerized simulations that appeared to show Democrats had packed Republicans in an unusually small number of districts, and produced a map more skewed than thousands of randomized alternatives.