What to expect on a cruise to Antarctic 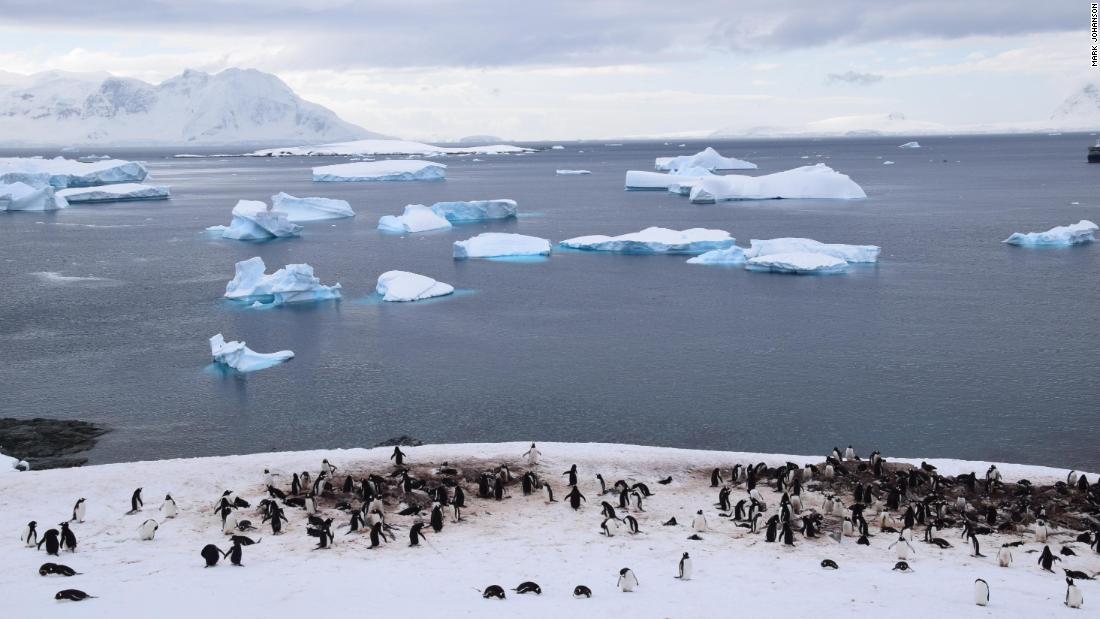 King George Island, Antarctica (CNN) — Travelers to Antarctica always remember the first place they planted their feet on the frozen continent. For me, it was Portal Point, a narrow tip of land jutting westward from the Peninsula just north of the Antarctic Circle.

Crackling sea ice had formed a thin cap of white atop water the color of steel as a Zodiac boat zipped me to shore. I then high-kicked over its inflatable rim and took some celebratory steps in knee-deep slush, clomping out a few hundred more in route to a hilltop overlook.

All around me were blindingly white mountains donning blankets of ancient snow. Down below, doe-eyed Weddell seals took siestas on sea ice while penguins belly-surfed out of the southern seas.

This is the kind of scene travelers dream of when they embark on the complex — and extremely pricey — mission of planning a once-in-a-lifetime trip to Antarctica.

There’s a lot to consider, and the odyssey actually begins long before you set off from South America.

Portal Point in Antarctica. Expedition cruises to the continent are a once-in-a-lifetime experience.

Factors that figure into planning

Ship size is the first thing to take into account when arranging a trip.

Smaller ships (with a higher guest-to-guide ratio) offer quicker departures from the mudroom at landing sites, more options for where the boat can visit and plenty of face time to get all of your Antarctic questions answered.

Cost, of course, is a crucial element. Travel to Antarctica isn’t cheap and most ships range from between $500 (on the low end) to $1,500 (on the high end) per person per day, inclusive of all meals, some drinks and most shore excursions. Sites such as Antarctica Cruise Guide and Cruise Critic can help you compare options.

Larger ships tend to offer a wider range of price alternatives. Yet less expensive tickets often leave out key items such as required gear (including waterproof, knee-high boots), pre- and post-trip lodging and flights to the main departure points of Ushuaia, Argentina, or Punta Arenas, Chile. So be sure those things are accounted for in price comparisons.

Sustainability is another key element. Reputable companies will belong to the International Association of Antarctica Tour Operators, whose goal is to “advocate and promote the practice of safe and environmentally responsible private-sector travel to the Antarctic.”

Many companies are now also carbon neutral and will display the certification on their website.

Finally, you want to be sure to check out the kind of programming on offer. Most journeys will include a robust educational component with daily lectures that help you contextualize the sights and sounds of the seventh continent.

All of these criteria eventually led me to Antarctica21’s Magellan Explorer, which holds 73 guests and had an educational focus.

As a bonus, it operates under the fly-cruise model, where you soar over the notoriously choppy Drake Passage in a plane (instead of enduring two wild days at sea), starting and ending your journey near the airstrip at Chile’s Base Presidente Eduardo Frei Montalva on King George Island.

Even still, the journey wasn’t 100% smooth sailing. Those first moments at Portal Point this past December were the culmination of a long-held dream. But in the moment, they felt like a dream hard earned.

The previous night’s trip down the Bransfield Strait, which separates the Peninsula from the South Shetland Islands, was replete with roaring winds, wild waves and a level of seasickness no pill could extinguish.

It was a voyage not unlike the swinging pirate ship rides at a carnival. Yet it proved to be the only night like that on my seven-day trip to Antarctica, where the only thing you can predict about the weather is that it’ll be wholly unpredictable.

The traditional Antarctica tourism season runs from November to March and, as a rule of thumb, temperatures typically range from about 28 to 40 degrees Fahrenheit (about -2 to 4 degrees Celsius), though heavy winds can make it feel a lot colder. You’ll want to get very specific information about what kind of specialized attire and gear is provided, and pack with “the onion layering system” in mind, choosing items you can put on or peel off as needed.

On my trip, the temperature hovered around freezing, but it wasn’t nearly as frigid as I’d envisioned. It was, after all, the start of the austral summer, where the sun can go almost an entire day without dipping below the horizon.

After sailing on the Magellan Explorer for two action-packed days, enjoying excursions and onboard lectures about wildlife and geology, I signed up for a special outing with Seattle native Allison Cusick, who was in charge of citizen science.

We departed one frosty morning in a Zodiac out to Neko Harbor, an icy inlet on the fjord of Andvord Bay.

It was here, in 2017, that Cusick founded FjordPhyto, a project that lets everyday tourists collect concentrated samples of phytoplankton (the base of the aquatic food chain), which will inform her research back at the Scripps Institution of Oceanography in San Diego.

“Science used to be behind closed doors,” the PhD student said as she motored through a labyrinth of blue icebergs in search of a clear patch of sea where we could snag some samples. “This is one way to open that door, especially down here in Antarctica where the Antarctic Treaty preserved it as a place for peace and science 62 years ago.”

We idled in the Zodiac near a colony with 250 breeding pairs of Gentoo penguins, who were waddling through the snow in front of a calving glacier. Like so many others along the Antarctic Peninsula, Cusick said it’s been in a state of dramatic retreat.

The polar scientist takes tourists to collect phytoplankton samples — and record the temperature and salinity of the seawater — at sites just like this up and down the Antarctic Peninsula. That’s because it’s not only one of the fastest-warming spots on Earth; it’s also one of the hardest for scientists to reach.

By participating in her research — and aiding budget-constrained scientists — she hoped visitors like me would leave as Antarctic ambassadors.

“This is when you come to a place and learn about it and go back home and tell its stories,” she said.

FjordPhyto now operates on a half-dozen ships from various operators as hands-on experiences like these become a focal point of Antarctic tourism. Some companies get visitors involved in seabird surveys, while others encourage guests to participate in internet-based projects like Happy Whale and Polar Tag, where you can upload animal photos to help researchers track migration patterns.

A Weddell seal is a delight to spot.

What to expect along the way

Mostly, though, days on an expedition cruise along the western side of the Antarctic Peninsula (where the vast majority of ships sail) are filled with morning and afternoon shore excursions, which are scheduled the prior evening based on weather conditions.

Some companies let you kayak in protected fjords, ski-tour remote bays or even scuba dive in the sub-zero waters, but I was content to spend my days hiking and photographing wildlife.

One of the best places for that was Palaver Point on Two Hummock Island, where I climbed two miles to the top of a pearl-white hill following the red flags a lead team had laid out for me. The views were over a craggy bay and a small colony of chinstrap penguins, which get their name from the tiny black bands under their fluffy white faces.

I also watched from a Zodiac as humpback whales lurched out of the waters of Fournier Bay, on the northeast side of Anvers Island, putting on a show of acrobatics so spectacular it felt choreographed.

Back on board the ship, I could sightsee from the comfort of my balcony since there were no windowless interiors (all cabins faced the sea). I also took trips to the gym and library before ending each night at the bar swapping tales with travelers who’d flown in from as far away as New York, London and Manila.

Near the end of the trip, we were all dining together in the evenings on three-course meals, airdropping photos and swapping email addresses over glasses of wine from Chile and Argentina. We’d shared the kind of experience that even seasoned travelers felt changed by — and we had a special bond because of it.

“It’s quite powerful being down here,” expedition leader Hadleigh Measham explained over a drink at the bar on my penultimate night. “A lot of people come just to tick off a box, their seventh continent, but they go away caring more about the natural world and our place in it.”

The final stop on our adventure was a classic that appears on almost every Antarctic itinerary: Deception Island. One of just two active volcanoes in Antarctica, it’s also one of the only places in the world where you can sail right into the middle of a flooded caldera.

We stopped in the morning at Whalers Bay, which holds the rusty remains of a Norwegian whaling station and the ruins of a British scientific base that was damaged in mudflows after a 1969 eruption.

In the afternoon, we circled around to Baily Head, a promontory on the outside of the volcano, which is home to up to 100,000 breeding pairs of chinstrap penguins (making it the largest penguin colony on the Western side of the Antarctic Peninsula).

Hundreds of little birds with painted black helmets raced along “penguin highways” from a gray-sand beach up to clifftops painted green with algae. Deception Island was like a vision of Antarctica past and present — the storybook ending to my weeklong journey experiencing the history, science and nature of Earth’s final frontier.