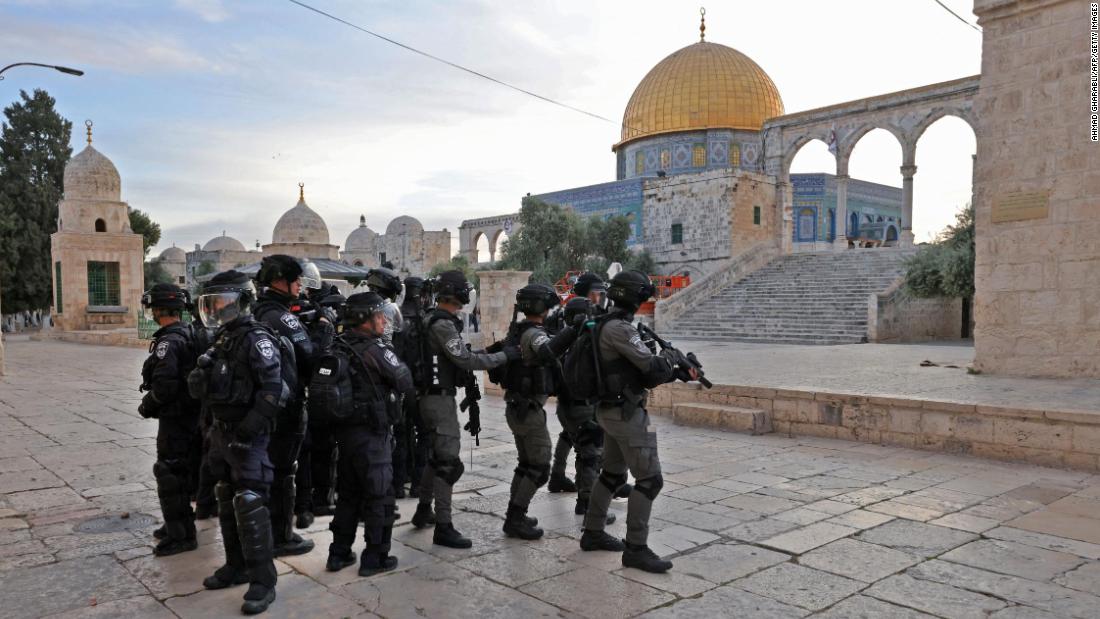 Jordan, the custodian of many important Muslim and Christian sites in the city, feels like it has been left with little choice than to issue statements of condemnation from Amman, less than 100 kilometers away.

The old city, where the al-Aqsa mosque is located, is in the eastern part of Jerusalem, which is considered to be under Israeli occupation by most of the international community, though Israel rejects this characterization.

To Jews the site is called Temple Mount, the holiest place in Judaism. Muslims call it the Haram al-Sharif (Noble Sanctuary) and revere it as the third holiest site in Islam.

Last week, Jordan summoned an Israeli diplomat and said Israel’s recent actions are aimed at “changing the identity” of the holy sites. Israel shot back, saying Jordan’s response to the recent unrest — with the country’s prime minister praising the stone throwers — was providing backing to those committing acts of violence.

Jerusalem holds dear value to the Hashemite rulers of Jordan, who are believed to be descendants of Islam’s prophet Mohammed. The monarchy has been the custodian of the city’s Muslim and Christian holy sites since 1924 and sees itself as the guarantor of the religious rights of Muslims and Christians in Jerusalem and the integrity of their holy sites.

Custodianship is significant for Jordan because it is rooted in history and serves as a source of legitimacy, says Marwan Muasher, vice president for studies at Carnegie Endowment for International Peace, who formerly served as Jordan’s foreign minister and was its first ambassador to Israel.

Since 1967, when Israel captured East Jerusalem from Jordan, arrangements have been governed by a ‘status quo’ understanding between the two. Israel formally recognized Jordan’s “special role” at the site in a 1994 peace treaty and the current arrangement allows only Muslims to worship there, although anyone is allowed to visit during certain hours.

Despite the title, Jordan’s custodianship doesn’t give it control over movement in and around the sites. The city is under Israeli control and the kingdom has no boots on the ground. But Israeli activities in and around the al-Aqsa mosque compound — including a number of archeological digs and visits by religious Jews, many of whom have been filmed apparently in prayers — have prompted previous diplomatic protests, without leading to significant changes in behavior.

“The leverage that Jordan has is both diplomatic and legal under the peace treaty, but it doesn’t have leverage on the ground,” Muasher told CNN. The current custodianship for Jordan, he adds, “is probably the best it can do under the current circumstances” to preserve its role in the city, as Israel is unlikely to offer it anymore.

Some experts warn this role is being eroded.

The title is just symbolic, says Amer Al Sabaileh, a non-resident fellow at Stimson Center in Washington, DC, “because the mosque is in the occupied territories, where Israel decides and controls everything … and that is the source of the problem.”

The custodianship model needs to be revised before it becomes a problem for Jordan, he says. As Israel normalizes relations with Arab states, he adds, the question of roles in the guardianship of Jerusalem’s holy sites may arise, and Jordan needs to capitalize on the value of its status there.

As a number of Arab states began a wave of normalization with Israel in 2020, the Jordanian government worried the custodianship would be transferred to Saudi Arabia as the ultimate prize for its potential recognition of Israel. The reaction in Jordan was fierce, prompting Riyadh to affirm Amman’s role as protector of the sites.

Ultimately, Muasher says, the only way forward is for Israel to resolve its issues with Palestinians in Jerusalem.

“What we have seen in the last few weeks in Jerusalem … is that it doesn’t matter how many agreements Israel is forging with the Arab world,” says Muasher. “If they can’t come to terms with the Palestinians living among them, then peace will not come.”

Turkish philanthropist Osman Kavala was jailed for life without parole on Monday after he was convicted of trying to overthrow the government by financing protests. Turkish opposition leaders vowed to overturn the sentence.

Yemen’s Iran-backed Houthis released the crew of a United Arab Emirates cargo ship that was seized on January 3, the group’s spokesman Mohammed Abdulsalam tweeted Monday, noting that a British citizen was also released alongside the crew members.

Libya’s parliament-appointed Prime Minister Fathi Bashagha discussed with senior US officials efforts to hold elections and to “establish economic and political security,” he said on Twitter early on Wednesday.

A farmer working his land in Gaza City uncovered the head of a 4,500-year-old statue of Canaanite goddess Anat, which was unveiled to the public on Tuesday.

The head was found in Sheikh Hamouda in Khan Younis, said Jamal Abu Rida, director of the Gazan Ministry of Tourism and Antiquities, at a press conference.

“At first, I hoped to sell it to someone to make some money,” Nidal Abu Eid, the farmer, told The New Arab, “but an archaeologist told me that it was of great archaeological value.”

Staff at the ministry concluded that the head belonged to a statue of Anat, the goddess of love, beauty and war in Canaanite mythology, said Rida.

The Canaanites were an ancient pagan people whom the Bible says inhabited Jerusalem and other parts of the Middle East before the advent of monotheism.

Rida called the statue “a symbol for the oldest human civilization that lived in Gaza City.”

Anat was the goddess of love, beauty and war, he said.

The statue will go on display at the Pasha’s Palace Museum in Gaza in the next few days, said ministry staff member Nariman Khaleh.

The museum, one of few in Gaza, served as a girls’ school before being transformed into a museum thanks to a German grant. The first story of the palace dates to the Mamluks, a Muslim dynasty that ruled Egypt and the Levant from Cairo from the 13th to the 15th centuries. The second story is largely Ottoman construction, according to the United Nations Development Program.

Gaza receives virtually no external tourists as movement in and out of the territory is heavily restricted.

Photo of the day