Madeleine Albright’s funeral to be held in Washington today 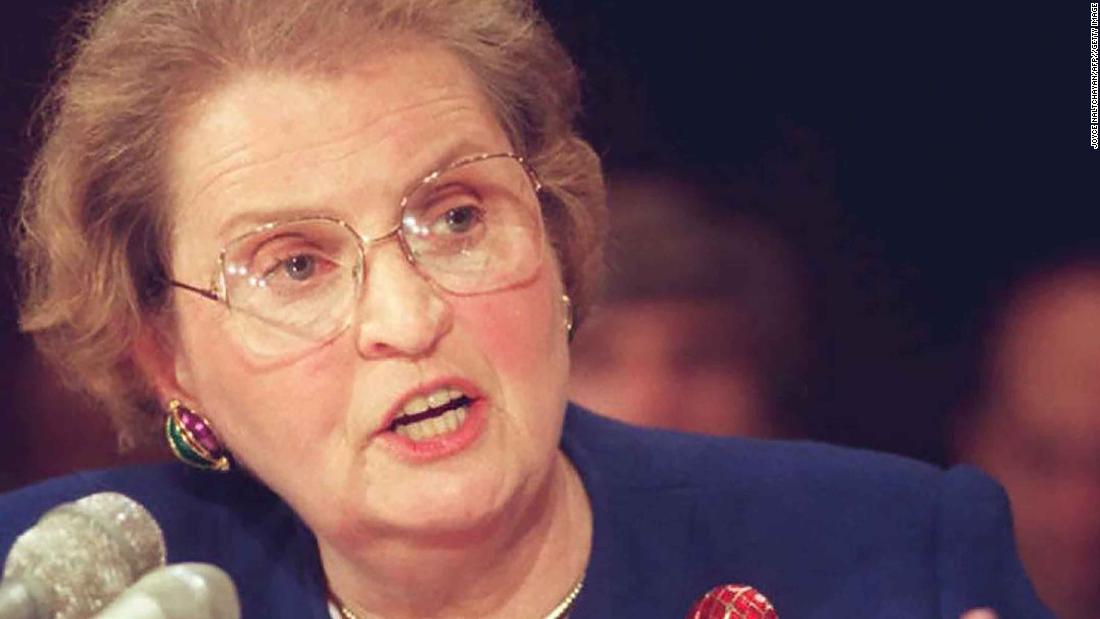 Albright, who died in March from cancer at the age of 84, is expected to be remembered by her friends and family, several current and former US government officials, American presidents, secretaries of state, foreign leaders and diplomats, as well as several Democratic and Republican members of Congress.
Albright was a central figure in former President Bill Clinton’s administration, first serving as his US ambassador to the United Nations before he picked her in his second term to be the first female secretary of state. In office, she championed the expansion of NATO, pushed for the alliance to intervene in the Balkans to stop genocide and ethnic cleansing, sought to reduce the spread of nuclear weapons and promoted human rights and democracy across the globe.
Albright’s cathedral service will begin at 11:00 a.m. ET on Wednesday, where tributes are expected from President Joe Biden, former President Bill Clinton and former Secretary of State Hillary Clinton. Albright’s daughters — Anne Albright, Alice Albright and Katharine Albright — will speak as well. Episcopal clergy are expected to officiate the service. Musicians Chris Botti and Herbie Hancock will perform tributes.

Several current and former federal officials are included in the lineup of readers and intercessors, including Wendy Sherman, a US deputy secretary of state; Condoleezza Rice, a former secretary of state and a former student of Albright’s father; and Susan Rice, who leads the White House Domestic Policy Council.

Several other Biden officials are expected to be in attendance, including Secretary of State Antony Blinken, Secretary of Defense Lloyd Austin, Secretary of Veterans Affairs Denis McDonough and US climate envoy John Kerry, a former secretary of state.

Along with several honorary pallbearers, the pallbearers at Wednesday’s service will be comprised of Albright’s diplomatic security service and protective detail during her time as an ambassador and as secretary of state.

Born Marie Jana Korbelova, the daughter of a Czechoslovakian diplomat, in Prague in 1937, Albright escaped her home country with her family 10 days after the Nazi invasion. Her experience growing up in communist Yugoslavia and then fleeing to the US made her a lifelong opponent of totalitarianism and fascism.

Albright became a face of US foreign policy in the decade between the end of the Cold War and the war on terror triggered by the September 11, 2001, attacks — an era heralded by President George H.W. Bush as a “new world order.” The US, particularly in Iraq and the Balkans, built international coalitions and occasionally intervened militarily to roll back autocratic regimes. Albright — a self-identified “pragmatic idealist” who coined the term “assertive multilateralism” to describe the Clinton administration’s foreign policy — drew from her childhood experiences growing up in and fleeing Yugoslavia to shape her worldview.

Following her tenure as secretary of state, Albright served as chairwoman of the National Democratic Institute for International Affairs in Washington from 2001 to her death, and she taught at Georgetown University. Albright was also a prolific author, penning seven New York Times bestsellers.

At Wednesday’s service, former teaching assistants who worked in Albright’s classes at Georgetown are expected to serve as ushers.

CNN’s Devan Cole and Caroline Kelly contributed to to this story.