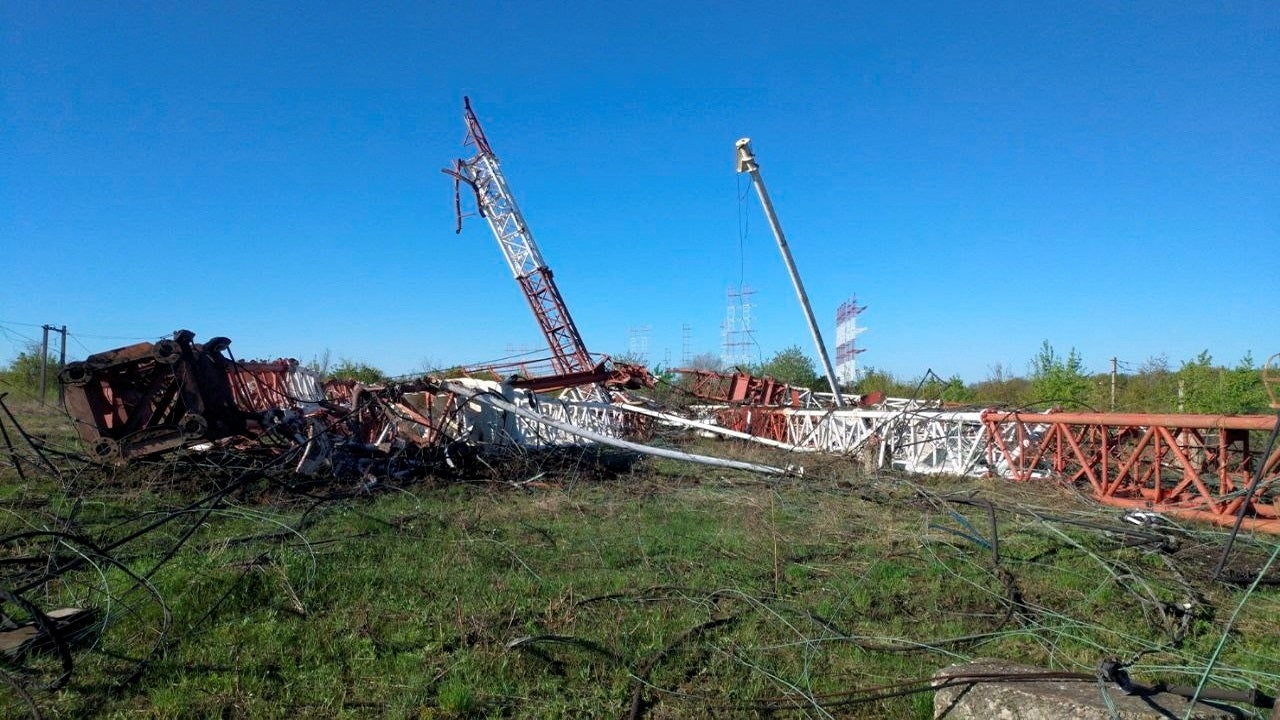 Authorities in Moldova are gathering Tuesday for an urgent security meeting following a series of blasts in a Russia-aligned separatist region, just days after one of Vladimir Putin’s generals suggested that country could be the next target of Moscow’s military aggression in eastern Europe.

At least two blasts this morning targeted radio antennas that broadcast Russian programs in Maiac, a town around seven miles from Moldova’s border with Ukraine, according to officials in the Trans-Dniester region.

They come a day after several explosions believed to be caused by rocket-propelled grenades were reported to have hit the Ministry of State Security in the city of Tiraspol, the region’s capital.

A view of destroyed radio antennas following the blasts, near Maiac, Moldova on Tuesday.
(Transdniestrian Interior Ministry/Handout via Reuters)

The Security Council of Trans-Dniester on Tuesday also reported damage to a military unit in the village of Parcani. They did not offer further details on that incident, but declared “a red level of terrorist threat” and promised to impose additional security measures in the region.

The Kremlin is aware of the explosions in Trans-Dniester, with spokesman Dmitry Peskov saying Tuesday that the situation “elicits concern” at the highest levels of Russian government.

Moldovan President Maia Sandu, in response, has called for a meeting Tuesday of the country’s Supreme Security Council.

“Control over the south of Ukraine is another way out to Trans-Dniester, where there are cases of Russian-speaking people being oppressed,” Minnekaev said, in an apparent threat to Moldova.

Trans-Dniester, a strip of land with about 470,000 people between Moldova and Ukraine, has been under the control of separatist authorities since a 1992 war with Moldova.

People pass next to a Soviet-era tank, now a monument celebrating the victory of the Red Army against fascist Germany, in Tiraspol, the main city of Trans-Dniester separatist region of Moldova, in April 2014.

Though a peace treaty between Trans-Dniester and the Moldovan government has been in place, the breakaway state has similarities to the self-proclaimed Donetsk and Luhansk People’s Republics in the Donbas region of Ukraine, which served as Putin’s justification for his illegal invasion in February.

Russia bases about 1,500 troops in Trans-Dniester, nominally as peacekeepers, but concerns are high that the forces could be used to invade Ukraine.

Fox News’ Caitlin McFall and the Associated Press contributed to this report.