MSNBC segment goes off the rails during debate over voter suppression 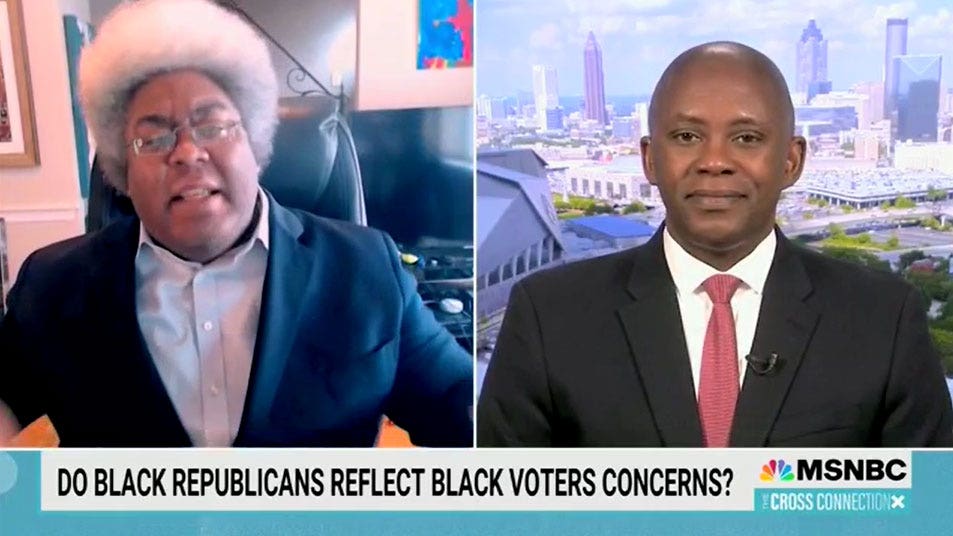 An MSNBC segment went off the rails Saturday during a debate over voter suppression as left-wing legal analyst Elie Mystal and Republican strategist Rufus Montgomery clashed in a fiery confrontation.

The breakdown happened as the two appeared together on “The Cross Connection,” with Mystal claiming it was because of “Republicans on the [Supreme] Court” that voting rights of Black Americans were being hindered and Montgomery blasting Mystal for “still crying about voter suppression” despite Democrats controlling both Houses of Congress and the White House.

Liberal host Tiffany Cross began the discussion by claiming voter suppression had “always been” a Republican tactic, and asked Montgomery what the party was doing to help everyone vote “fairly and freely.”

Montgomery responded by praising the election law Georgia passed in 2021 aimed at ensuring election integrity and pushed back on Cross, who was repeating Democratic talking points about the bill and describing the policies as “garbage.”

He argued that Democrat run states like Delaware and New York had stricter voting rules in place than Georgia, and that providing food and water to voters in line posed a potential public health concern, despite Cross suggesting not doing so would amount to voter suppression.

MEDIA WATCHDOG: PRESS IS ‘LYING TO YOU ABOUT ELECTIONS’ AS DEBATE HEATS UP OVER DEMOCRATIC VOTING BILLS

“Do you know what section two of the Voting Rights Act does? Section 2 of the Voting Rights Act is how I get to sue for racism in voting. Who took that away? Was it Democrats? No, no, no! That would be Sam Alito, John Roberts, Brett Kavanaugh, Amy Coney Barrett, Clarence Thomas. That’s five people, all appointed by Republicans, Rufus, not Democrats,” he added, flailing his arms.

The conversation broke down and became inaudible as the two attempted to speak over each other, before Montgomery was finally able to break through and blame Democrats for putting in place “the nuclear option” that allowed Supreme Court nominees to be confirmed with a simple majority vote in the Senate.

Mystal attempted to interrupt Montgomery, but the latter stopped him.

Cross noted that Montgomery posed “a fair question,” but ended the segment without letting Mystal respond.