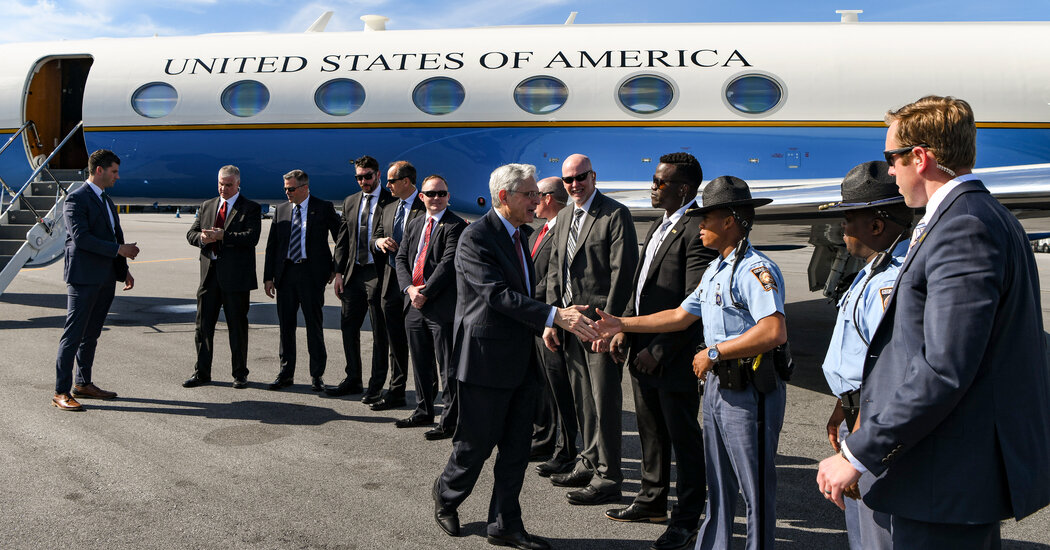 During a recent swing through the South, Attorney General Merrick B. Garland chatted up participants in a police program in Georgia aimed at redirecting youth who had sold bottled water on interstate highways into less dangerous work. He announced funding to address policing problems like the use of excessive force. He talked about mental health support, an issue he has thought about since he saw firsthand how officers who responded to the 1995 Oklahoma City bombing struggled to process the horror.

For all of the attention on the Justice Department’s investigation into the Jan. 6 attack, the trip was focused on the everyday work of being the attorney general, fighting crime and serving as a steward of law enforcement. Over two days in Georgia and Louisiana, Mr. Garland, in interviews with The New York Times on his plane and later in Baton Rouge, would say only that the assault on the Capitol “completely wiped out” any doubts he had about taking the post.

“I felt that this was exactly why I had agreed to be attorney general in the first place,” he said. “Jan. 6 is a date that showed what happens if the rule of law breaks down.”

By most accounts, becoming attorney general was a tough adjustment for a former appeals judge who had last worked at the Justice Department in the late 1990s. But more than a year into his tenure, colleagues say that a cautious leader has found some footing, more a prosecutor now than a deliberator.

In interviews, a dozen administration officials and federal prosecutors, all of whom spoke on the condition of anonymity to describe internal discussions, said Mr. Garland, 69, initially ran his office like a judge’s chambers, peppering even Deputy Attorney General Lisa O. Monaco and Associate Attorney General Vanita Gupta with the kind of granular questions that clerks might expect while writing his opinions.

But the slow pace that characterized Mr. Garland’s early months has somewhat quickened. Decisions that took weeks at the outset can now take a day. And with more top officials confirmed, he can be less directly involved in the department’s day-to-day work.

Mr. Garland has said that the department must remain independent from improper influence if it is to deliver on its top priorities: to uphold the rule of law, keep the nation safe and protect civil rights.

He has notched victories. Many career employees say they no longer feel pressure to satisfy blatantly political demands, as they did under the previous administration. The department created a unit dedicated to fighting domestic terrorism and charged important cybercrime cases. Prosecutors won high-profile convictions in the killings of Ahmaud Arbery, a Black jogger, and George Floyd, a Black motorist.

But in a significant setback, prosecutors failed to win convictions against four men accused of plotting to kidnap Gov. Gretchen Whitmer of Michigan. The Bureau of Prisons remains plagued by violence, sexual abuse and corruption. And Democrats still castigate Mr. Garland for not moving more aggressively to indict former President Donald J. Trump for trying to undo his election loss. Republican critics accuse him of using the department to improperly wade into culture wars, including fights over school curriculums and the pandemic response.

Seated on a sofa in the U.S. attorney’s office in Baton Rouge, Mr. Garland detailed the chaos he encountered when he took the reins in March 2021. Colleagues said that if the typical transition between parties is like relay racers passing a baton, this was a runner searching for a stick dropped on the track.

Trump administration officials who expected to spend their final weeks preparing briefing binders for the incoming administration instead parried false cries of voter fraud and absorbed the horror of the Capitol attack. Mr. Trump’s refusal to acknowledge his defeat shortened the transition process. The Biden team would not be up to speed on every issue that awaited them.

The first order of business was the nine-week-old Jan. 6 investigation, which entailed a nationwide manhunt and hundreds of criminal cases.

Ms. Gupta scrutinized corporate mergers and initiated reviews of police departments in Minneapolis and Louisville, Ky. Ms. Monaco’s office, which oversees the Jan. 6 inquiry, eased tensions between prosecutors and officials on the case. She closed the federal prison in Manhattan to address subpar conditions, and is pushing for more Bureau of Prisons reforms.

Soft-spoken and slight, Mr. Garland has an understated manner that makes him easy to underestimate, associates said. But they insisted that his questions were always probing, and that he seemed to remember every answer.

Some aides said he was slow to shift the department away from postures that had hardened during the Trump era. He took four months to reaffirm a longstanding policy that strictly limits the president’s contact with the department and to curb the seizure of reporters’ records. The department sued Georgia three months after the state passed a restrictive voting law, frustrating the White House.

Prosecutors were told over a year ago to expect a new memo allowing them to forgo harsh mandatory minimum sentences, such as those for nonviolent drug dealers who had sold crack rather than cocaine. They are still waiting.

In a move that some aides believe reflected the unusually high level of detail he needed to feel prepared, Mr. Garland often dispatched Ms. Monaco to attend White House meetings in his place. This year, he has attended nearly all of them.

Ms. Monaco’s office overcame hiccups, too. It did not play its traditional management role under its predecessor, and she had to ease information bottlenecks. Exceedingly wary about cybercrime, she used a pseudonymous email address. That precaution, normally taken by attorneys general, gave those outside her staff the impression that she was difficult to reach.

“I’m delegating more,” Mr. Garland said in the interview. “It’s easier to deal with crises every day, and new decisions, if you’re not still working on the old ones.” With Covid risks easing, he has held more meetings of the kind he attended in Georgia and Louisiana, and has met in person more frequently with his leadership team.

He will not say when he intends to step down, but administration officials believe that he would willingly serve beyond the midterm election.

Protecting the Rule of Law

For most of a 90-minute flight to Atlanta on a 12-seat government plane, Mr. Garland sat near the front, editing speeches, conferring with his chief of staff and juggling updates from Washington. In a quiet moment in the interview, he spoke with seeming relish about his prior life as a prosecutor. He recalled uncovering a State Department record that proved a witness had lied, and shining a flashlight behind a document to show a judge and jury that a defendant had doctored it with correction fluid.

As a special assistant to Attorney General Benjamin Civiletti in 1979, Mr. Garland helped codify reforms that stemmed from President Nixon’s abuses of power. After a stint in private practice, he became a top department official under Attorney General Janet Reno. He supervised the investigation into the Oklahoma City bombing, that era’s most serious domestic terrorism attack, before joining the federal appeals court in Washington.

“Failure to make clear by words and deed that our law is not the instrument of partisan purpose” would imperil the country, Mr. Garland said the next day, when his nomination was announced.

Numerous inquiries. Since former President Donald Trump left office, there have been many investigations and inquiries into his businesses and personal affairs. Here’s a list of those ongoing:

His mission was bedeviled from the start, largely because Jan. 6 was not a singular event but part of Mr. Trump’s ongoing campaign to subvert the law for personal gain.

Democrats and legal scholars have argued that Mr. Trump’s brazenness gave Mr. Garland leeway to ignore norms. Mr. Biden has privately fumed that Mr. Trump should be behind bars. And a Democrat-led House committee investigating the Jan. 6 attack has said that Mr. Trump committed a crime — comments that jurors could see as politicians pushing the Justice Department to indict a political foe, an accusation often leveled at Mr. Trump.

“A prosecutor has to prove every single element of a crime beyond a reasonable doubt. You can’t bring charges on a Hail Mary pass expecting that a jury will feel the guy is bad,” said Senator Richard Blumenthal, Democrat of Connecticut and the state’s former attorney general.

Mr. Garland has privately expressed concerns that giving in to political considerations could weaken norms that protected the department during the Trump era. Officials generally agree, but some acknowledge that the institution could lose credibility if prosecutors cannot assert in an indictment that Mr. Trump did something wrong.

Historically, in rare cases of great public interest, the department has closed cases and explained why it chose not to indict. “If there was a case that cries out for public explanation it would be this one,” Mr. Blumenthal said.

Mr. Garland refuses to discuss ongoing investigations, aware that doing so could undermine them. He told NPR that he is “not avoiding cases that are political or cases that are controversial.” Rather, he is avoiding “making decisions on a political basis.”

During his first year, Mr. Garland paid particular attention to states that have sought to weaken voting rights and ban abortion. These legal battles have implications for voters and courts, groups that can check presidential power.

“The core purpose of the Justice Department is to protect civil rights and civil liberties, and the fundamental element of that is the right to vote,” Mr. Garland said. “That’s what makes this country a representative democracy.”

If those rights are curbed, he added, “inherently, people worry about whether elections are fair.”

Mr. Garland doubled the number of voting rights prosecutors, sued Georgia and Texas over their new voting laws and indicted people who had threatened Georgia state officials and a Nevada election official.

His rare political entreaties have been for Congress to pass voter protection laws so he can enforce them.

Mr. Garland also worked on the department’s response to the Texas abortion law that all but bans the procedure, including the lawsuit aimed at stopping Texas from enforcing the statute and the department’s Supreme Court brief. (The court recently allowed the law to stay in effect until lower courts decide its fate.)

In his estimation, Texas not only took away a right that the Supreme Court had long upheld, but it also did so in a way that severely curbed the power of the courts. The result, he said, was a road map for states seeking an “end run” around “any right in the Constitution.”

“He is not a grandstander. He is not a showboater,” said Karen Dunn, who clerked for Mr. Garland and is now a lawyer in Washington. “He brings to this work a deep love for the Justice Department and a deep commitment to the values of the department and the ideals of justice.”

During a private meeting between Mr. Garland and federal prosecutors in Atlanta, one official broached the Jan. 6 investigation. Mr. Trump had pushed out their former U.S. attorney for not finding election fraud, and he had pressured Georgia officials to overturn the election result. They were eager for an update.

But Mr. Garland offered no new insights. There was no talk about where the inquiry was heading. No discussion of the larger stakes. Behind closed doors, he only repeated his public statements: The attack was an unacceptable assault on elections, the cornerstone of democracy. The department was trying to track down every lead.

And prosecutors, he said, were working around the clock.