Kaş: A beautiful unspoiled corner of the Med 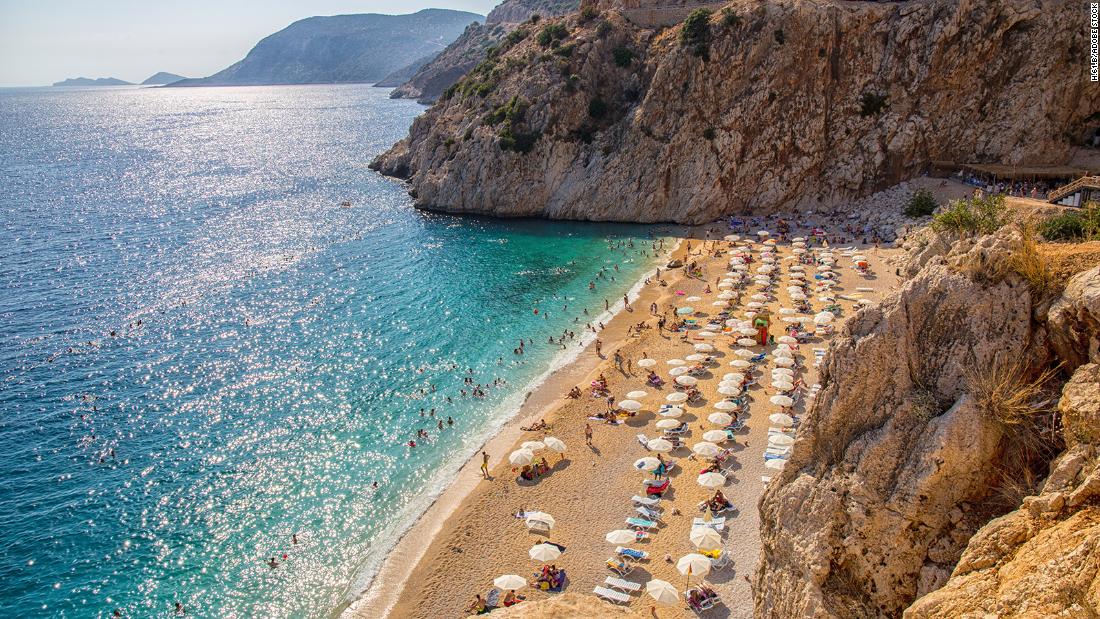 (CNN) — At the point where the sky ends, a giant man sleeps stretched along a mountainous ridge overlooking the Mediterranean Sea.

At least that’s how it appears when seen from the old harbor of Kaş, on the south coast of Turkey. Legend has it a female giant lives over the water on the island of Meis, called Kastellorizo in Greek. Should the sea ever touch them both at the same time, the two will awake and fall in love.

It’s a suitably romantic tale for this seaside town that remained relatively unknown to outsiders until the early 1980s when bronzed sailors moored their yachts at the harbor to restock.

Backpackers from Europe and the Antipodes soon followed.

In between, exiled sons from wealthy Istanbul families made Kaş (a word meaning eyebrow in Turkish) their home, bringing with them a love of music, good coffee and nature.

Due to the rugged geography and no airport really close by, Kaş has retained its small fishing village charm. Nonetheless it offers plenty of activities whether you’re a sun lounge potato, a foodie or “jump off a mountain and paraglide” type of person.

Like everywhere in Turkey, Kaş oozes history. Home to numerous dynasties and peoples, it was originally established as a trading port known for high-quality cedar and sea sponges, and came to prominence under the Lycians who lived here before the rise of the Greek empire.

Hittite texts from before 1200 BCE refer to the area as Lukka lands while the ancient Greeks named it Antiphellos.

In the second century BCE, during the Roman period, the Lycians formed the Lycian League, the first ever democratic union in recorded history made up of elected representatives. They believed the afterlife was equally important so they built stone sarcophagi in the form of houses to provide for the dearly departed.

The streets of Kaş are lined with traditional houses.

Modern-day Kaş is still full of tombs, found on intersections, pedestrian streets and scattered throughout the surrounding landscape.

This makes it very easy to experience history without really trying, but it does help to know the lay of the land. The street leading down from the bus station to the mosque, Cumhuriyet Meydan (town square) and the harbor is Atatürk Bulvarı.

Turn west at the bottom and head along Old Hospital Road to the outdoor Hellenistic theater from the first century BCE. It’s a favorite spot for yoga practitioners, while music lovers enjoy the free summer concerts.

The limestone tiers face the sea, making it an ideal place to sit and daydream, especially at sunset.

Continue on to Cukurbağ Yarımadası, otherwise known as the peninsula, but take note, the round trip is almost seven miles. Serious walkers can follow part of the Lycian Way right up to the Sleeping Giant where they’ll see two ancient tombs and get an incredible view.

An even better and definitely much easier way to enjoy those vistas is a tandem paraglide flight down over Kaş from nearby Babadağ.

Back in town it’s possible to inspect one of only two water cisterns left over from the many built in the Hellenistic and Roman periods, on the way to get a drink. That’s because it’s housed under a bar.

Really though, most people come for the sea and it’s not an exaggeration to say the water turns every shade of blue as the sun moves overhead throughout the day.

Some pensions and hotels have their own waterfront access, but there are plenty of other options for sun worshippers and swimmers.

For a change of scenery, catch a minibus to Kaputaş.

At Küçük Çakıl Beach, a tiny sliver of sand east of the main square, restaurants with wooden decks wrap around the cliffs, shaded by leafy trees. It’s the perfect location to do absolutely nothing, aside from taking a cooling dip from time to time.

Around 30 years ago, local fishermen began supplementing their income by taking people over to Limanağazı. Back then they’d throw out a line and any fish caught ended up on the BBQ outside the only inhabited house.

These days small boats regularly ferry holidaymakers over to Limanağazı’s two dreamily pretty beaches, both fully equipped. History enthusiasts should disembark at the second one where they can follow a path up to Lycian tombs set in a dramatic rock face.

For a change of scenery but the same glorious sea, walk to Büyük Çakıl Beach or catch a minibus to Kaputaş. Or try a daily boat trip. Standard tours are anything but, dropping anchor to view an underwater city, swim in a pirate’s cave and explore an ancient fortress. A delicious BBQ lunch is included.

Kaş also offers diving, gület (traditional wooden boat) tours and even the chance to go overseas. After all, Meis is only about 3.5 nautical miles away.

Greeks come over from the island on Fridays when residents from the villages in the hills above Kaş bring their produce to sell at the markets, just behind the bus station. Leave room in your luggage for a jar (or possibly two) of the local honey. It’s particularly good due to the high-altitude pine forests.

Kaş is a foodie heaven offering everything from traditional-style grilled meats, pide and seafood meze to plant-based menus, vegan cakes and third-wave coffee, just for starters.

The serious eating takes place at night and evenings start and finish in Cumhuriyet Meydan, complete with a statue of modern Turkey’s founder, Mustafa Kemal Atatürk.

Families, singles, couples, locals, tourists, young and old. Everyone comes here. Some eat at one of the restaurants set around the edges. Others sit on the low wall and bench seats opposite, snacking on freshly stuffed mussels washed down with beer. Many set off in the direction of the Old Hospital Road, go down around the harbor or plunge into the narrow lanes leading off the square.

Those in search of a quiet drink or out to change the world head to funky little bars on Terzi and Zümrüt streets, past Uzun Çarşı. There’s a huge fourth-century stone sarcophagus at the top of this steep cobblestone street. Officially called Likya Yazılı Anıt Mezar but more commonly, the King’s Tomb, it makes a fabulous background for selfies.

Uzun Çarşı is the place to go for handcrafted shoes, carpets, antiques and vintage wear sold in former Greek houses, many built by families who moved across from Meis in the 19th century. As proof that everything old is new again, a formerly overlooked coastal path on the opposite side of town is now home to upmarket bars and restaurants offering Greek-inspired menus.

Drawn by the friendly local population, stunning scenery and crystal-clear waters, many visitors return year after year, because the essence of the town has changed very little. Although these days the boating crowd frequent a modern marina on the other side of the peninsula, Kaş is still a place where time passes only as quickly or as slowly as the lapping of the tide.