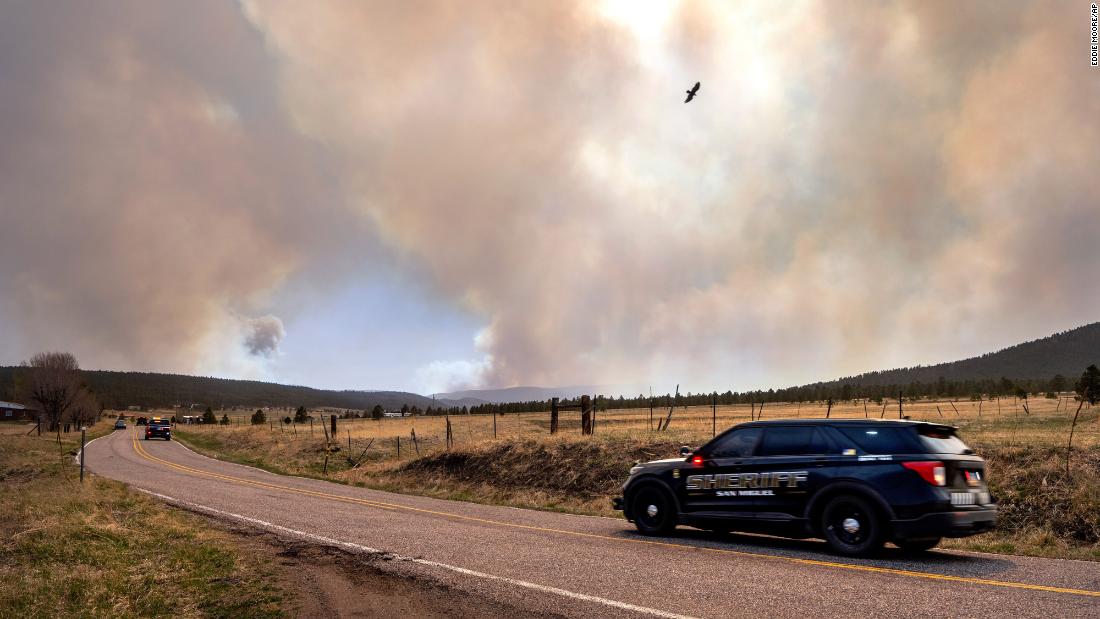 It’s one of several fires burning in the West, with flames also tearing through Arizona and Nebraska, where one person has died.

Easing winds and lower temperatures in the southwest are expected to provide firefighters with some temporary respite Monday — and there is even a chance of rain and snow showers in northeastern New Mexico, CNN meteorologist Robert Shackelford said.

“There is a chance for light snow accumulations and the Calf Canyon fire is just on the cusp of this, so any precipitation is very appreciated. But unfortunately, the winds and temperatures will pick up there as well starting Tuesday and will peak into Friday,” Shackelford said.

At a briefing Sunday evening, officials warned the combined fire had the potential to spread and there is still a lot of unburned fuel within its boundaries.

“Firefighters are fully engaged we have the whole suite of our firefighting forces available — air resources, ground resources, intelligence resources,” Incident Commander Carl Schwope said. He noted it was a very complex fire with a perimeter of more than 180 miles.

Two “scooper” aircraft had been deployed to scoop water from a nearby lake to douse the flames, with a further two expected Monday, Jayson Coil, operations sections chief, said at the briefing.

Heavy helicopters that can hold up to 2,000 gallons of water as well as air tankers were also in use, Coil said.

In Arizona, evacuation orders have been lifted for neighborhoods affected by the Tunnel Fire, which has burned just over 21,000 acres of land, according to InciWeb.

The fire has been burning across northern Arizona’s Coconino County for nearly a week and was only 3% contained as of Sunday, the InciWeb report said. Firefighting crews remain in the area as they continue relief efforts.

As residents began returning to their neighborhoods Sunday, the full scale of destruction from the fire came into view.

Shirley Ernst hadn’t yet seen the burned remains of her home in person but CNN affiliate KNXV was able to show her video of the scene.

“It’s unbelievable, you know? We still feel like this is a dream, a bad dream,” Ernst told the station. “All your efforts, all your sacrifices, just there, you know, in ashes … There’s no word to describe the pain.”

George Adson said seeing that his home survived the fire was a relief but he felt for his neighbors who lost everything.

“You have a little bit of survivor’s guilt,” Adson told KNXV. “Just the fact that our property is looking pretty good right now, and you look right up there, there’s nothing there.”

Officials cautioned residents returning to their homes to beware of hazardous conditions the blaze left behind.

“Examples of hazards include fire weakened trees that may fall without warning, loss of ground vegetation can loosen rolling debris and rocks and ash pits from stumps may look benign, but will hold hot ash for quite a while and can cause severe burns if stepped in,” the report said.

In Nebraska, one person has died as a result of the fires in the southwestern portion of the state.

Retired Fire Chief John P. Trumble, 66, was driving while acting as a spotter. Smoke and dust blocked his visibility, causing his vehicle to leave the road. He was then overwhelmed by fire and smoke, according to the Red Willow County Sheriff’s Office.

Trumble died while driving along Road 407, a location that has been part of Nebraska’s larger wildfire emergency, named the Road 702 Fire — which was estimated to have burned more than 50,000 acres by Sunday afternoon, according to the Nebraska Emergency Management Agency (NEMA).

All evacuation orders previously issued for the blaze have been lifted as of Sunday afternoon, NEMA notes.