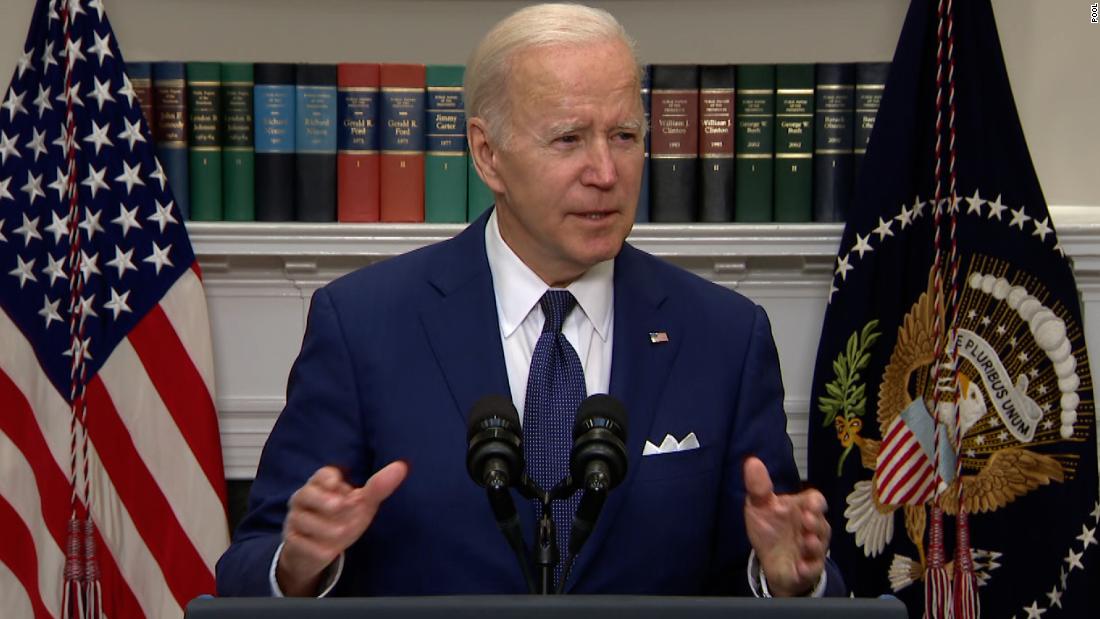 The President said last week during a trip to Buffalo, New York, after a mass shooting took place at a grocery store there that there was “not much on executive action” that he could do to further strengthen gun control measures. He said he needed to instead “convince Congress” to pass legislation like the 1994 assault weapons ban.

“Will there be more executive actions and will we do more? We’ll look into that. We’re always looking to do more,” White House press secretary Karine Jean-Pierre told reporters on Thursday. “But right now we need the help of Congress. We need them to step in.”

Gun violence prevention organizations like Everytown for Gun Safety and Brady have praised the numerous executive actions the President has taken on guns since taking office, including to curb the use of so-called ghost guns and bolster community violence intervention programs.

But there are several further actions they say they would like to see the President take:

Clarification from the Department of Justice

Federal law requires anyone “engaged in the business” of dealing in firearms to obtain a federal firearms license and run background checks on potential firearms purchasers. One option available to Biden is directing the Department of Justice to clarify that those “engaged in the business” also includes people selling guns at gun shows or online marketplaces in order to close loopholes.

“Just like we don’t have one airport line for people willing to be screened and another for those who would rather skip it, we can’t allow individuals selling multiple guns for profit to continue peddling guns to complete strangers with no questions asked,” John Feinblatt, president of Everytown for Gun Safety, told CNN.

“So many of this administration’s executive actions and directives have required DOJ to be focused on the impact of gun violence in America. There should be a coordinator within DOJ that is solely focused on working to end gun violence,” the vice president of policy at Brady, Christian Heyne, told CNN.

Heyne said he would like to see the Biden administration issue language making it clear that firearm trace data should be made public in order to better understand how to stop the flow of illegal guns. He said “harmful interpretations” of the 2003 Tiahrt Amendment restricts the public’s ability to obtain information about trace data. Because of restrictions in the amendment, the ATF cannot publish detailed tracing data.

“It is a basic accountability issue,” Josh Horwitz, the co-director of the Center for Gun Violence Solutions at Johns Hopkins, told CNN.

Horwitz said the Biden administration could also prioritize funding to support the enforcement of extreme risk protection orders, which are also known as “red flag” law. The orders allow the temporary removal of guns from people deemed at high risk of harming themselves or others. He noted the effectiveness of the orders to prevent acts of violence depends completely on implementation and enforcement.

Biden announced a new regulation to contain the use of so-called ghost guns, which are self-assembled firearms that do not have serial numbers and are difficult to track and regulate. Ghost gun kits can be bought online and the weapon can be assembled in as little as 30 minutes.

The rules require anyone purchasing a kit to undergo a background check and requires those selling the kits to mark components with a serial number. It also mandates firearm dealers add a serial number to ghost guns that have already been assembled.

Ghost guns make up a relatively small share of the guns recovered by law enforcement but officials say the weapons have become more common at crime scenes in recent years.

The plan includes a federal focus on improving lethal means safety, which is a voluntary practice to reduce one’s suicide risk by limiting access to objects that can be used to cause self-harm, including medications, firearms or sharp instruments.

The President directed the Department of Justice to announce a new rule clarifying the obligations firearm dealers have to make secure gun storage or safety devices available for purchase. Biden also directed the Bureau of Alcohol, Tobacco, Firearms and Explosives to issue a best practices guide to all federal firearm dealers to remind them about steps they are legally required to take to keep communities safe.

Last summer, the Justice Department launched an anti-gun trafficking initiative focused on Chicago, Los Angeles, New York, the San Francisco Bay Area and Washington, DC, which are known corridors in which illegal guns are being trafficked and used in deadly shootings and other crimes. The goal of the strike forces is to better coordinate law enforcement agencies across jurisdictions to disrupt trafficking networks.

Biden directed the Justice Department to publish model “red flag” laws for states that allow the temporary removal of guns from people deemed at high risk of harming themselves or others.

The $1.9 trillion Covid relief law, or the American Rescue Plan, allocated $350 billion to states, local governments, territories and tribes. The administration says that funding is available for law enforcement purposes as well as to expand community violence intervention programs.

Several groups have praised the President’s appointment of Steve Dettelbach, a former federal prosecutor, to run the Bureau of Alcohol, Tobacco, Firearms and Explosives. If confirmed by the Senate, Dettelbach would be the nation’s top gun regulator.

During a Senate confirmation hearing on Wednesday, the day after the shooting at the elementary school in Uvalde, Dettelbach vowed to lawmakers that he would not be influenced by political considerations if he secures the job.

The President argues Dettelbach’s confirmation by the Senate to the ATF is key to enforcing gun laws and curbing gun crime. The ATF has operated under a series of acting directors since its last Senate-confirmed leader stepped down in 2015, and the Senate last confirmed an ATF nominee in 2013.