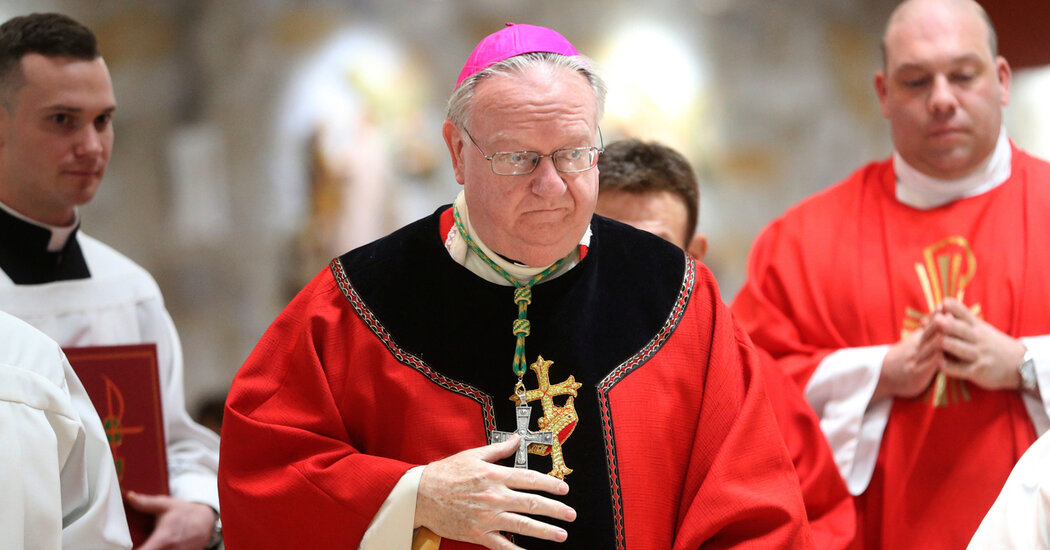 The Diocese of Camden, N.J., said on Tuesday that it had agreed to pay $87.5 million to settle claims made by hundreds of people who accused clergy members of sexually abusing them, one of the largest such settlements involving the Catholic Church in the United States.

In what may be a first for such litigation, the ultimate payout to the plaintiffs could be substantially higher, lawyers representing them said, because the settlement allows for further litigation against insurance companies for the diocese and related entities like parishes and schools.

“This is a triumph of courage, with all credit to the survivors for staying unified and strong,” Jeff Anderson, a lawyer for about a quarter of the roughly 300 plaintiffs, said.

In a statement announcing the settlement, Bishop Dennis J. Sullivan, the leader of the diocese, said, “I want to express my sincere apology to all those who have been affected by sexual abuse in our diocese.

“My prayers go out to all survivors of abuse,” Bishop Sullivan added, “and I pledge my continuing commitment to ensure that this terrible chapter in the history of the Diocese of Camden, New Jersey, never happens again.”

The agreement comes about three years after New Jersey became one of a number of states to extend its civil statute of limitations, so that people who said they had been sexually abused as children could sue. New York took a similar step the same year.

The settlement also follows a 2020 bankruptcy filing by the diocese, which has 62 parishes and serves some 500,000 Catholics in six southern New Jersey counties. That filing came amid a growing number of abuse claims.

By then, Bishop Sullivan had named 56 priests and a deacon connected to the Camden diocese who had been credibly accused of sexually abusing children. The revelation was part of a broader disclosure by Catholic bishops in New Jersey that nearly 200 priests had been accused of committing such abuse in the state.

Under the settlement’s terms, the $87.5 million will go into a trust and be paid out over four years, according to the diocese’s statement. Individual payouts will vary, the plaintiffs’ lawyers said, but the average per person would be around $300,000.

The settlement also calls for maintaining or improving protections for children, according to the parties. Because the agreement is wrapped up in the diocese’s bankruptcy, it requires a judge’s approval.

Mr. Anderson said that the diocese, its parishes and related entities, and the insurance companies representing them had tried to force through an unsatisfactory settlement by getting the judge’s approval without securing the plaintiffs’ agreement.

In the end, he said, the plaintiffs and the diocese arrived at a settlement that did not include the insurance companies. As part of the agreement, the diocese, its parishes and the related entities like schools gave the plaintiffs the right to pursue claims against the insurers.

That meant the litigation would continue, with the potential to substantially increase the amount of money the plaintiffs ultimately receive, said Mr. Anderson, a veteran of similar cases. He said that aspect of the settlement was a first in his experience.

The Camden diocese is one of about 30 dioceses and Catholic orders in the United States to file for bankruptcy, according to the website BishopAccountability.org, which tracks abuse cases against the church.

In New York, the dioceses in Buffalo, Rochester, Syracuse and Rockville Centre on Long Island have also filed for bankruptcy. All face multiple abuse claims, as do New Jersey’s other four dioceses.

According to figures compiled by BishopAccountability.org, the tentative Camden settlement is among the top five payouts in abuse litigation involving the Catholic Church in the United States. It is larger than the $84 million paid out by the Boston diocese in 2003, but below settlement figures in litigation in California and Oregon.

Jeffrey D. Prol, the lawyer for the committee representing the plaintiffs in connection with the bankruptcy, said in a statement that his clients were “pleased to have reached a consensual resolution of its disputes with the Diocese.”

In a separate interview, Mr. Prol said the satisfaction was not just tied to financial compensation.

“For the survivors, this is not about the money,” he said. “This is about making sure their voices are heard and making sure this never happens again.”