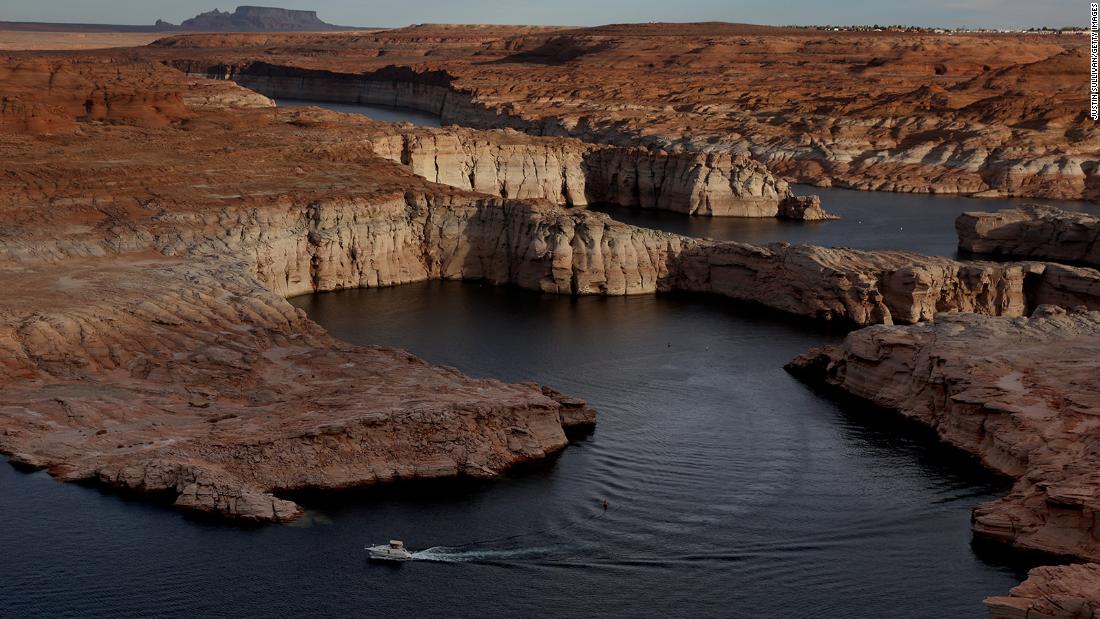 Runnels is the chief administrator of the Antelope Point Marina on Lake Powell, the second-largest reservoir in the country and part of the Colorado River system, which provides water for more than 40 million people in the West.
After decades of drought, Powell’s water level has sunk to unimaginable lows, threatening Runnels’ business and the millions of other people who rely on the lake’s water.
Runnels has had to make rapid adjustments to the plummeting water level, and has fashioned new routes to get from the bank to the water. He told CNN he’s working on getting another permit to lower the access point another 20 feet.
Lake Powell has dropped nearly 100 feet in the past two years amid what scientists have determined is the worst multiyear drought in at least 12 centuries. Runnels blames several things for the low water levels, including overuse. There are more people using water from the Colorado River than what it can naturally sustain. He also said he sees the fingerprints of climate change.

A new Gallup poll shared first with CNN found 1 in 3 Americans said they have been affected by some kind of extreme weather in the past two years, and those who had been were far more likely to say the climate crisis is a threat. Gallup estimates that around 6 million people were affected by drought in that time.
It’s the first time Gallup has asked respondents in their annual environment poll about their experience with extreme weather. It found 78% of respondents who have faced recent extreme weather — like the West’s megadrought, the Texas deep freeze, deadly hurricanes like Ida — believe the effects of climate change are already unfolding, compared to 51% who had not.

“People see this happening more and more across the country, and I think they’re making that connection,” Jeffrey Jones, senior editor with Gallup, told CNN. “It’s certainly influencing how they view the [climate] issue.”

Republicans and Republican-leaners are less likely to be concerned, Gallup reported, but there was a 15-point percentage gap in climate concern between those who had (28%) and had not (13%) been affected by an extreme event.

“Extreme weather events are, in fact, more common now than they used to be,” Jones said. “They’re certainly getting a lot more attention in the news, and within that discussion, they’re saying this is evidence of climate change.”

The survey, which was conducted in early March, confirmed how people have a hard time understanding the gravity of the crisis until it reaches their doorstep, Jones asserted.

People in the South and West were significantly more likely to report they had faced an extreme event than those living in the East or Midwest, Gallup found. And of those who said they had such experiences, a majority listed extreme cold, hurricane, winter storm or extreme heat as the event affecting them.

Among respondents in the West, wildfires, extreme heat and drought were the events most commonly reported.

“These data indicate that many people are starting to realize that our climate isn’t just warming, it’s becoming more variable, which is really bad news for agriculture, water supplies, industry, and so many other critical aspects of life,” Jennifer Marlon, a climate scientist at the Yale School of the Environment, who was not involved with the poll, told CNN.

Marlon contended it is good news most people are finally connecting the dots between extreme weather and global warming.

“The next question is, do people understand that burning coal, oil, and methane gas is what is causing the chaotic severe weather?” Marlon posed.

On Monday, the UN’s Intergovernmental Panel on Climate Change warned the world must make immediate transitions away from fossil fuels and toward renewable energy, like solar and wind, to limit the impact of the climate crisis — otherwise, the West is destined for more drought and heat, the oceans will continue to inundate coastal communities and extreme weather will become more deadly than it already is.

Around 65% of Gallup’s respondents believe humans are to blame for Earth’s warming over the past century, rather than natural changes. But while 45% believe global warming poses a threat to their way of life during their lifetime, there are 54% who don’t.

At Lake Powell, Runnels is hoping to see the water level rise as snow melts and drains down from high elevations.

“You’re going to get some runoff from the snow in Colorado and Utah, even though it’s not optimal, not where it should be,” Runnels said. “We figure we’ll probably get 10 feet. And if we’re lucky, we’ll get 20.”

Runnels’ marina is in a “deep channel,” but he says others aren’t as lucky.

“This marina, we can probably sustain that for a while now,” Runnels said. “Some other places that are not in the main channel where it’s 300 feet deep? Yeah, you know, they’re going to have issues.

“If it continues to go down, they’re going to be the first ones more or less dried up.”