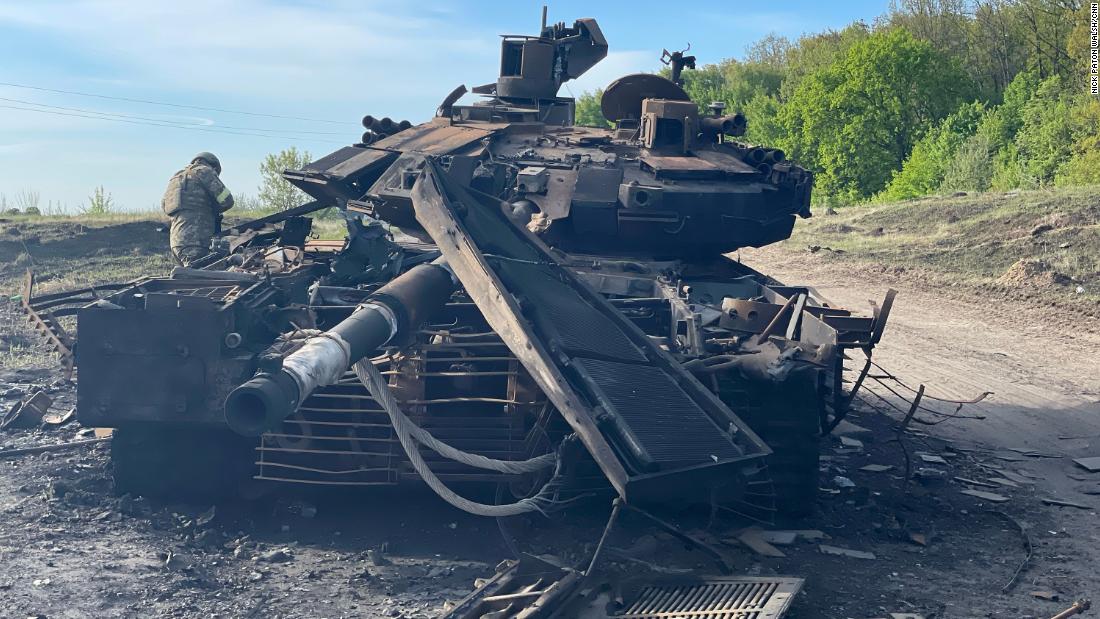 The first — three cars, laden with a priest, dogs, and troubled frowns — is headed hurriedly through the village of Staryi Saltiv from the north, fleeing the violence as Ukraine pushes Russian forces out of Rubizhne. “We don’t even know what’s happening,” one driver said. “We didn’t stick around to find out.”
Ukrainian officials said this week that they continue to push towards the Russian border, liberating tiny villages on the outskirts of Kharkiv, the country’s second largest city before the invasion began. The Ukrainian advances threaten the symbolic embarrassment of expelling the Kremlin’s forces back to their own border and while posing the strategic threat of cutting Russia’s supply lines into Ukraine and its forces further south in the Donbas region. The advances have been swift over the past weeks.

The second convoy speaks of what Ukraine has found in Russia’s wake — five vehicles riddled with bullets, two torched to cinders.

On May 4, Ukrainian officials have said, this convoy was trying to leave the town when it was shot up by Russian troops. The bullet holes concentrate on some of the drivers’ doors. Children’s clothes and toys litter the area around the vehicles. Ukrainian officials said that four civilians, including a 13-year-old girl, were killed when Russian troops opened fire on this convoy.

CNN’s escorts from the Kharkiv city territorial defense force say a tank shell hit one of the cars, explaining how its front section is twisted beyond recognition.

Moscow says its forces don’t target civilians, a claim contradicted by evidence of apparent atrocities witnessed by CNN here and elsewhere in Ukraine.

A short walk up the road, out into the forest and hills nearby, are the remains of a Russian convoy. In the trees lie the remains of an armored personnel carrier, its tracks torn off by a rocket propelled grenade, our escorts say. Sleeping bags, prayer books, grenades and rations litter the leaves where the Russian troops slept, just outside of the village. Two Russian corpses were found there days earlier and have since been buried.

On the brow of the hill sits another, more rare piece of wreckage — the remains of a Russian T90M tank destroyed days earlier, apparently by a Swedish-supplied Carl Gustav recoilless rifle. The Ukrainian defense ministry released a video filmed by a drone of the tank being destroyed in the apparent strike, showing the vulnerability of Russia’s newest armor to NATO’s hand-carried weapons. The tank’s turret has been dislodged and ball bearings from its shells lie in the ashes.

The Ukrainian counter-attack to disrupt Russian supply lines is ongoing. Ukraine’s General Staff said Friday that Russian forces, “did not conduct offensive operations in the Kharkiv direction. The main efforts were focused on preventing the advance of our troops in the area of the settlement of Vesele,” another village less than an hour’s drive from Staryi Saltiv in normal times. The Ukrainians have taken back a number of villages in this area east of Kharkiv.

As Russian forces continue to retreat, three bridges in the Kharkiv region had been demolished, according to satellite imagery obtained by CNN on Friday. It seems likely that Russian units destroyed the bridges in an effort to protect their supply lines from further Ukrainian advances.

Elsewhere in Kharkiv region, the Russians appear to be using artillery sporadically but with deadly effect. On Thursday, shelling of the town of Derhachi killed two people, according to the local administration and destroyed the humanitarian center and medical facilities.

In a village nearby Staryi Saltiv, locals appear less aware of the details of their occupation and liberation. One man, Viktor, is at a well, filling tin buckets as there has not been electricity or water in his street for weeks. Only three of his neighbors remain.

“What calm? My heart is about to jump out of my chest,” he said. “Everything around is exploding. There’s a hole in the garden from a shell impact. The roof was punctured by a shell, the fence is gone. It’s really difficult. We sleep with our clothes on. They land nearby. There is nowhere to hide.”