What Happened When a Conservative Jewish Group Invited DeSantis to Speak 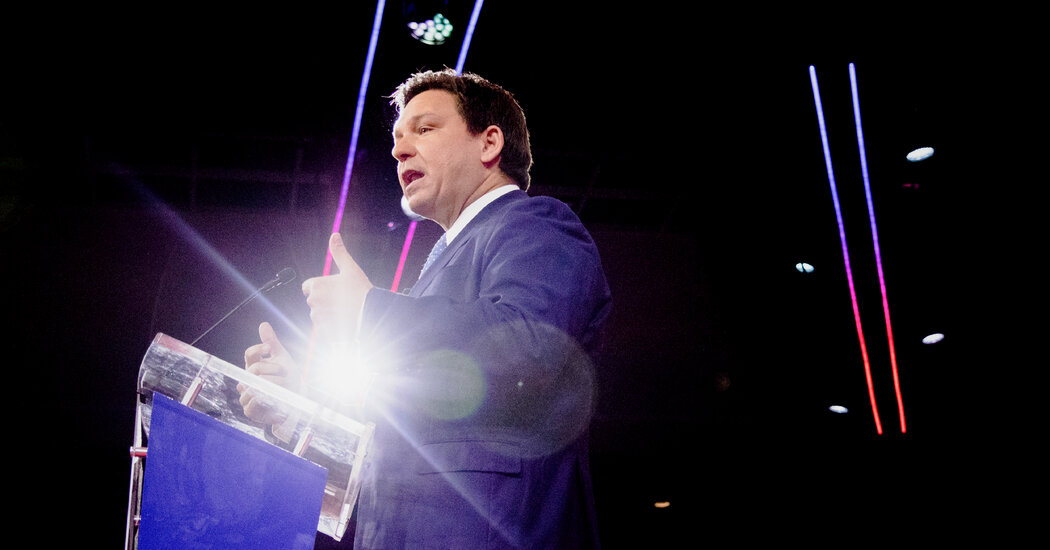 The Tikvah Fund, a conservative Jewish organization, was all set to host a conference in June at the Museum of Jewish Heritage in New York, when months of planning were suddenly derailed by its last-minute addition of a speaker who might have once been uncontroversial: the Republican governor of Florida.

The fund had invited Gov. Ron DeSantis to discuss the vibrancy of Jewish life in Florida, a topic the fund wrote about in the April issue of its magazine, one month after Mr. DeSantis had signed legislation that prohibits classroom instruction and discussion about sexual orientation and gender identity in elementary schools. Opponents have called the law “Don’t Say Gay.”

Tikvah signed a contract and sent it to the museum before Mr. DeSantis was added to the lineup, and the trouble began once the group updated its program to include the governor.

“Thanks for sharing this with me,” read an email to the fund from Trudy Chan, an official with the museum. Ms Chan noted that providing security for the governor would not be a problem, but she added: “We would need to ascertain if there are any potential conflicts with your invited speakers. Please stand by.”

The next day, Ms. Chan asked the fund to “pause” its $11,500 deposit payment and requested a conversation with its leaders, according to emails. In subsequent phone calls, Eric Cohen, the chief executive of Tivkah, was informed that an event with Mr. DeSantis could not be held at the museum, which describes itself as “a living memorial to the Holocaust,” because the “Don’t Say Gay” bill does not align with its values of inclusivity, Mr. Cohen told The Times.

The museum did not allow political speakers or events at its museum, Mr. Cohen said he was told, despite recent events featuring Democratic politicians like Gov. Kathy Hochul of New York and Representative Alexandria Ocasio-Cortez.

“The museum has implied that Tikvah wanted to host a partisan political event,” Mr. Cohen said. “Our event endorses no candidates and serves no political party. It is all about ideas, just like every prior conference we have held at the museum.”

The museum’s chief executive, Jack Kliger, declined several requests to be interviewed for this article, but the museum has explained its actions in a series of public statements that expressed its concern with the political nature of the event and the amount of security the governor might need. A spokesman for the Museum of Jewish Heritage emphasized that the museum had nothing to do with the event outside of discussing the rental of its space to the Tikvah Fund.

Politics have become increasingly challenging for Jewish institutions in recent years, as Americans become divided over issues like L.G.B.T.Q. policies and the results of the 2020 presidential election. New York City is no exception. Neighborhoods with a large population of Reform Jews voted decisively for President Biden in the 2020 election, while those with many ultra-Orthodox Jews overwhelmingly voted for Donald J. Trump.

That has put institutions like the Museum of Jewish Heritage in a very difficult position.

“As American domestic politics has become more and more ferociously polarized, and increasingly as people see conservatives not just as different but fundamentally anti-democratic or illiberal or authoritarian or racist, holding together this big tent is really, really difficult,” said Peter Beinart, a writer and editor-at-large for Jewish Currents, a progressive magazine, who also writes for The New York Times.

“Any institution that is built today on the need to serve both conservatives and progressives, whether it is the N.F.L. or a Jewish museum or anything else, is finding that work harder and harder to do,” Mr. Beinart said.

The Tikvah Fund first made its complaints against the museum in an opinion piece for The Wall Street Journal, written by Mr. Cohen and Elliott Abrams, a national security official in several Republican presidential administrations and a special representative in the Trump administration.

In it, they accused the museum of engaging in cancel culture and speculated that its leaders may have been afraid of protests because “a lot of people dislike Mr. DeSantis.”

“In the name of inclusivity, a Jewish museum sent us a clear message: Some people are to be excluded,” they wrote. “In the name of fighting hate, the museum decided that the millions of Floridians who support Governor DeSantis — including many Jews — are so hateful that they don’t even merit a voice in the great American conversation. A museum of tolerance has become intolerant.”

After the opinion piece was published, the museum issued a public statement, saying that the article “contains many factual inaccuracies,” and described the decision as “simply a contractual and logistical decision.”

It invited Mr. DeSantis to “visit” the museum as a tourist and accused Tikvah of “trying to create a fight where none exists.”

“No one was banned or canceled,” the statement said. “The fact is that no contract with the Tikvah Fund was ever signed for this rental event to be held at the museum, and no deposit was ever made.”

The museum had never signed the contract, but a negotiation between the two parties had been underway, according to the Tivkah Fund, which said that there had been a series of emails discussing the event and the museum’s $23,000 rental fee before it was announced that Mr. DeSantis would be joining the lineup.

In a letter to The Wall Street Journal, Mr. Kliger accused Tikvah of “political bullying” and duplicity, saying it signed the contract just so it could accuse the museum of canceling it.

He wrote that the situation arose in part because the fund had not promptly provided the museum with details about the conference, which seemed to have a political nature that violated the museum charter.

“When we declined to host the event, Tikvah resorted to threats, saying we had created an enemy,” Mr. Kliger wrote. “Tikvah knew that this was not about banning anyone from speaking but decided to make the false claim anyway.”

In a subsequent statement to The Times, Mr. Kliger emphasized yet another reason. “Late in discussions” with Tikvah, the museum realized the event “warranted significant additional security,” he wrote. “The intensity of those security requirements clearly implied a potential level of activity around the conference that was not standard practice for the museum.”

Mr. Kliger emphasized this point in his letter to The Wall Street Journal. “This was not about banning or canceling Governor DeSantis,” he wrote. “The museum must consider the safety of visitors and staff.”

Governor DeSantis declined to comment, although a statement from his office chastised the museum for what it described as the politicization of a sacred space. “A Holocaust memorial should never be politicized,” it said, adding that the governor was committed to keeping Florida “a safe and welcoming home for the Jewish people.”

The Tikvah Fund will still present the 2022 Jewish Leadership Conference. Appearing at Pier 60 in Manhattan this June alongside Governor DeSantis will be a number of prominent speakers, including Mike Pompeo, secretary of state under President Trump, and John Podhoretz, the editor of Commentary magazine.

Topics will include “How to Fight Back Against Wokeness: A Jewish View” — a conversation between Mr. Podhoretz and Bari Weiss, a former Times opinion writer — and “On Jewish Exceptionalism.”