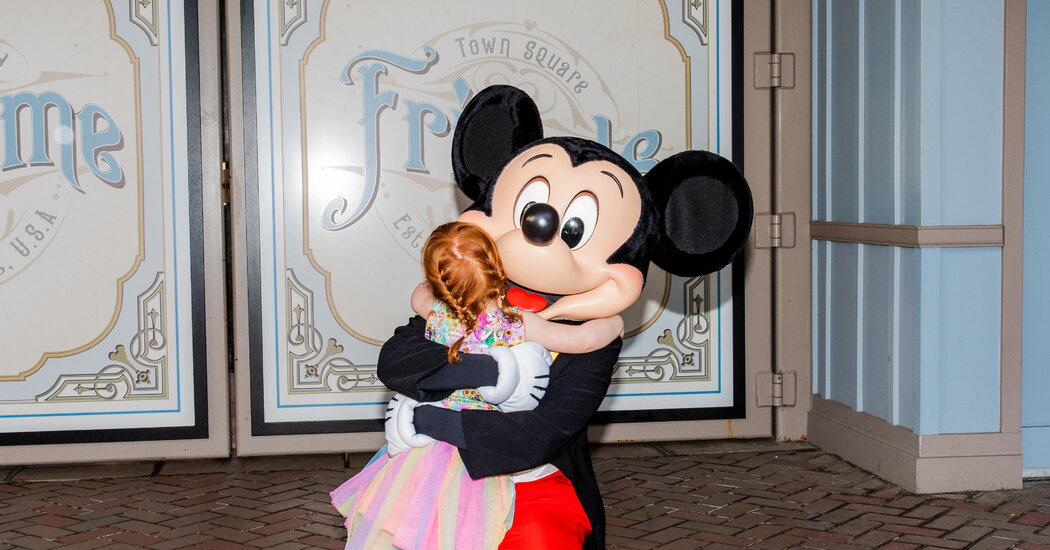 “It’s part of what makes Disney so special,” said Bri Petrarca, who had brought her sons, Grayson, 5, and Asher, 2, to meet characters on Monday. She was wearing a pink T-shirt emblazoned with the words, “Here for the hugs.”

About 50 people were waiting at that moment to hug Minnie Mouse, who had appeared in her polka dots near the Main Street U.S.A. magic shop. Three women in their 20s, each wearing mouse-ear headbands, waited their turn; one of them, Natalie Parks, from Salt Lake City, said hugging Minnie was “a chance to reconnect with my childhood.”

TikTok, Instagram and the ubiquity of camera phones have made such interactions more sought out than ever, according to Robyn Vossen, Disneyland’s general manager of entertainment operations. In some instances, characters appear without notice (always with a handler to run interference). Some characters, including the Disney princesses, are so mobbed that the company has built indoor, heavily themed environments for them to inhabit. Walt Disney World in Florida even offers front-of-the-line reservations.

“Fur characters” (those in full-body suits) do not speak and appear only for about 30 minutes at a time, largely because it can be exhausting for the performer, especially in summer heat. “Face characters,” like the princesses, do not wear masks or chat with guests. Disneyland has roughly 50 costumed characters in rotation, Ms. Vossen said.

With the return of character hugs, operations have been almost fully restored at Disney’s domestic resorts after a lengthy period in which social distancing and other coronavirus safety measures took priority. The company dropped most face-covering requirements in February. Disneyland’s Main Street Electrical Parade is set to return on Friday.

Disney needs this summer to be a blockbuster: The division of the company that includes theme parks had $16.6 billion in revenue last year, down from $26 billion in 2019, according to financial filings.