Protesters have held peaceful demonstrations outside homes of conservative SCOTUS justices. Republicans want to stop that 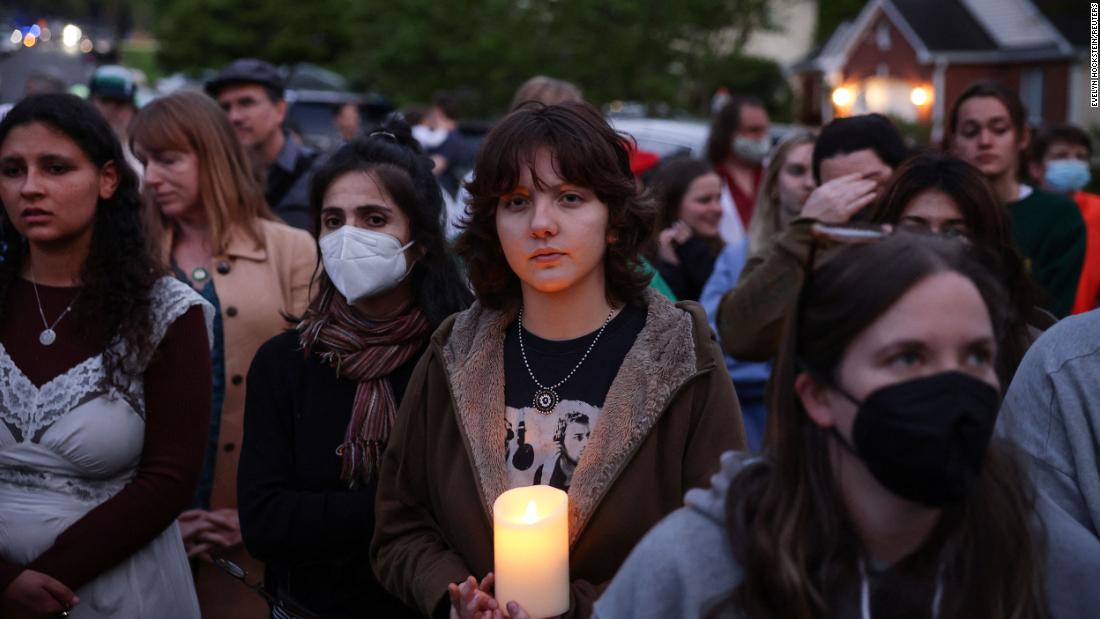 In recent days, protesters have held peaceful demonstrations outside the homes of multiple conservative Supreme Court justices following publication of a draft Supreme Court majority opinion that would overturn Roe v. Wade. In a statement Wednesday evening, a Justice Department spokesperson said Garland was continuing to be briefed on the “security matters related” to the justices and that he had directed the US Marshals Service to provide assistance to the separate police agency that provides security to the Supreme Court.

The statement came as Republicans ramped up the pressure on Garland to enforce the law and as appropriateness of the protests have split Democrats, who are hoping the outrage over an expected Supreme Court decision gutting abortion rights will boost them in the midterms.

The White House and Senate Majority Leader Chuck Schumer have declined to condemn protests outside justices’ homes as long as they stay peaceful, while Senate Judiciary Committee Chairman Dick Durbin called them “reprehensible” on Thursday. The Senate has also approved a new security package for justices and their families, but the bill’s prospects in the House are unclear.

“The President may choose to characterize protests, riots, and incitements of violence as mere passion,” Iowa Sen. Chuck Grassley, the top Republican on the Judiciary Committee, said in a Wednesday letter to Garland. “But these attempts to influence and intimidate members of the federal judiciary are an affront to judicial independence.”

The Justice Department declined to comment on the letters from Republicans pushing to enforce the 1950s era statute. But the involvement of the US Marshals Service could make it easier for federal prosecutors to enforce the law conservatives are citing, along with other laws should protesters pose a threat. No arrests have been made at this point and the demonstrations so far have been peaceful.

Law enforcement officials say that while similar statutes have been upheld in other circumstances not like the current protests, it is broad and hasn’t been used to prosecute other protests that would appear to be illegal under the 1950 law.

Governors of states where justices live ask for federal assistance

The leak last week of a draft majority opinion overturning the Supreme Court’s 1973 precedent enshrining abortion rights has prompted demonstrations in front of the homes of Justices Samuel Alito, who penned the draft opinion, and Brett Kavanaugh, who is presumably part of the conservative majority in favor of reversing the 1973 Roe v. Wade ruling. Protestors have demonstrated in front of Chief Justice John Roberts’ home as well.

A barrier was erected around the Supreme Court grounds last week after the draft opinion was disclosed. The US Marshals Service said in a statement Monday that they are helping to respond to “increased security concerns stemming from the unauthorized release of the draft opinion.”

The Republican governors of Maryland and Virginia, where several justices have their homes, pointed to the law in a Wednesday letter asking Garland to offer more federal resources to protect Supreme Court justices, as they urged him to enforce the federal statute that bans protesting meant to influence judicial actions.

“We are also deeply concerned by reports of demonstrators using threatening language,” Maryland Gov. Larry Hogan and Virginia Gov. Glenn Youngkin said in the letter, which noted that one person told CNN affiliate WUSA9: “If you take away our choices, we will riot.”

The governors’ letter comes amid questions about whether local or state authorities could bring prosecutions under state law, like a Virginia law prohibiting picketing that “disrupts” an individual’s “right to tranquility in his home.”

Asked by CNN about that Virginia law, the local prosecutor in Fairfax County — where some of the justices live — said that the demonstrators would not be prosecuted by his office.

“I will not prosecute community members for peacefully exercising their First Amendment rights. My focus will remain on acting to safeguard the rights of women in Fairfax County should this dangerous draft Supreme Court decision take effect, which is why I have pledged to never prosecute a woman for making her own healthcare decisions,” Fairfax County Commonwealth’s Attorney Steve Descano said in a statement to CNN.

Protest law aimed at efforts to influence the judicial process

The federal law in question calls for fines and up to a year in prison for “pickets or parades” near “a building or residence occupied or used by” a judge that have the “intent of influencing any judge” in the “discharge of his duty.”

The law was also cited in the letter sent to Garland on Wednesday by Grassley.

“It is beyond dispute that far-left activists have launched a concerted and coordinated effort to intimidate the Court into changing the draft Dobbs decision,” Grassley wrote, referring to the name of the abortion case now before the court.

“But instead of investigating and prosecuting this illegal activity, the administration has been sadly dismissive of the threats and danger to both the justices and our judicial system writ large,” he wrote.

The White House has warned against any ” violence, threats, or vandalism” toward the justices.
Sen. Tom Cotton, an Arkansas Republican who also sits on the Judiciary Committee, also cited the law in his own Tuesday letter to Garland that went as far to suggest that the attorney general may face impeachment proceedings if Republicans retake Congress.

The Justice Department statement Wednesday did not reference the law, nor did it make any commitments to prosecute the demonstrators who protest outside the justices’ homes.

Legal experts — pointing to Supreme Court precedents addressing similar kinds of laws — said it was likely the 1950 law that covers protests at judges’ residences would be upheld as constitutional, and they said it appeared to applicable in the current circumstances.

One of the relevant rulings was the court’s 1965 opinion in Cox v. Louisiana, in which the court said, “A State may adopt safeguards necessary and appropriate to assure that the administration of justice at all stages is free from outside control and influence.”

If that and other Supreme Court rulings weren’t currently on the books, there could be plausible arguments for why the 1950 law is unconstitutional, according to Eugene Volokh, a constitutional law professor at UCLA School of Law.

But, he said, “You’ve got a precedent that’s pretty clearly on point and the answer is, at least for now, that’s the law.”

Best Memorial Day grill sales: Save on everything you need for summer barbecues