Former Obama advisor says ‘inflation is here to stay,’ predicts November will be a ‘tough one’ for Democrats 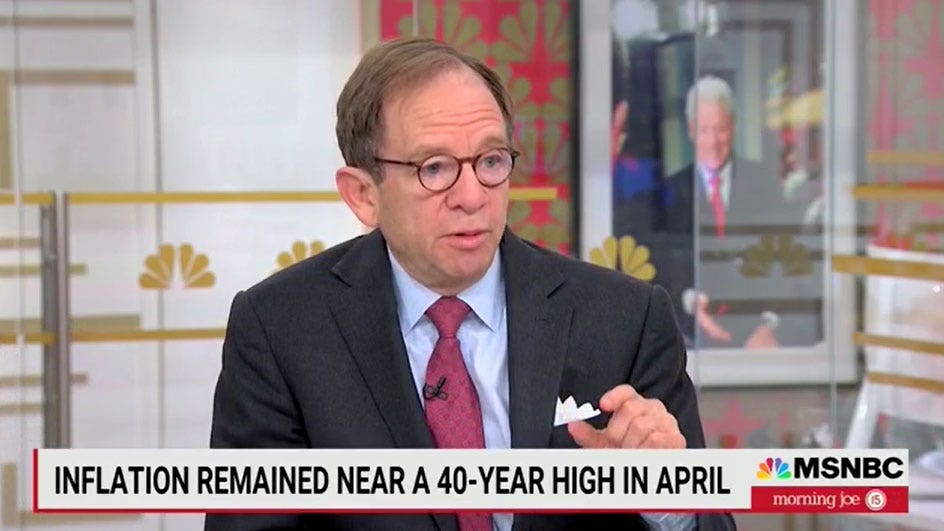 During an appearance on MSNBC’s “Morning Joe,” Rattner declared, “Inflation is here to stay,” and argued it would be “the defining issue” in the upcoming midterm elections, making November “a really tough one” for Democrats.

Former Obama Treasury adviser Steve Rattner on the set of MSNBC’s “Morning Joe” on May 12, 2022. (Screenshot/MSNBC)

Co-host Mika Brzezinski began the topic by expressing her worry over inflation, as well as Democrats “hanging their hat” on being the solution to it.

“I’m not sure one person, one country, one party can solve this problem with everything that’s happening around the world,” she said, before stating that President Biden had been traveling the country to learn from, and empathize with, Americans suffering from the crisis. She asked Rattner if inflation was “here to stay.”

“Inflation is here to stay,” Rattner declared, arguing it was “the defining issue in the midterm elections,” and that the Democrats’ control over the House and Senate was at stake because of it.

Referring to charts released by the Federal Reserve outlining the change in inflation rates over time, including a slight dip from March to April, Rattner suggested it was possible inflation might have peaked earlier in the spring.

A gas pump displays current fuel prices, along with a sticker of President Joe Biden, at a gas station in Arlington, Virginia, on March 16, 2022.
(Photo by SAUL LOEB/AFP via Getty Images)

He added that if you removed gas prices from the calculation, the inflation rate for April would actually have been 0.4% higher than the massive 8.3% recorded rate.

“Look, the president has been blaming everything except himself and the Democrats for the inflation,” Rattner said, arguing the only element in Biden’s favor was that inflation is “a worldwide phenomenon.”

He then outlined the factors contributing to inflation that he saw as within the control of the Biden administration.

“And look, it’s the number one issue, and it’s going to be a really tough one for Democrats,” he added.

He went on to argue that none of the policies being pushed by Biden would have “any meaningful affect” on inflation between now and the fall.