Opinion: No more union-busting. It’s time for companies to give their workers what they deserve 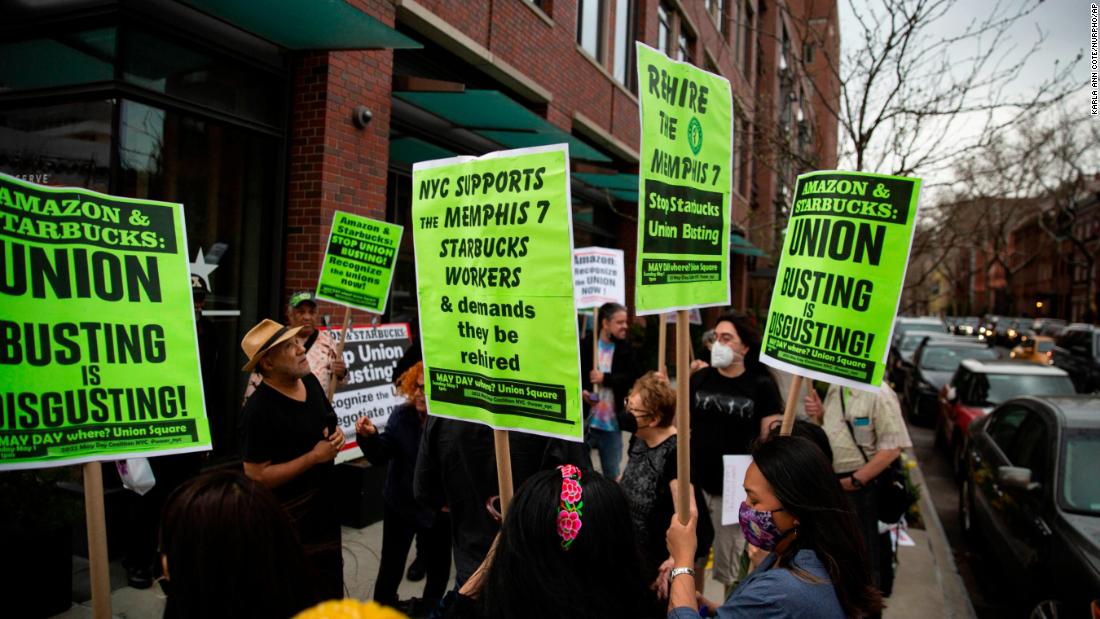 There are good reasons to believe workers’ organizing momentum will continue (union election filings are already up 57% during the first six months of this fiscal year). Frontline workers are asserting their worth after more than two years of risking their health during an ongoing pandemic while watching corporate profits and CEO pay continue to soar. They are looking to unions and collective bargaining as keys to attaining a living wage, stable schedules and a safer workplace. And they are using the leverage provided by a tight labor market to start building the power and influence necessary to reverse harmful policies and economic trends.
For decades, wage suppression, growing income inequality and persistent racial and gender wage gaps have characterized the US labor market. Disappearing benefits, intolerably long hours and discriminatory or unsafe workplaces are the result of policy choices and unequal power that have enabled fierce corporate opposition to erode union density by more than half over the past 40 years. From corporate-driven global trade rules that undercut wages while protecting profits, to weak labor laws that spell out workers’ rights on paper but carry no penalties if employers violate them, failed policies have diminished workers’ bargaining power and degraded job quality across the economy.

But now, as workers are pointing the way to better workplaces and a more equitable economy, employers and policymakers need to pay attention. Policymakers must better protect workers’ union rights, and employers must start respecting workers’ right to participate in union elections without interference or coercion.

Unions are among the most effective mechanisms available for addressing massive economic inequalities. Congress should adopt labor law reforms to better protect workers’ right to organize, starting with the widely popular Protecting the Right to Organize (PRO) Act. Among other things, the PRO Act would create the first serious monetary penalties for employers that retaliate against workers for unionizing.

The PRO Act also creates a process for using mediation and binding arbitration to ensure that new unions and employers can reach an initial contract agreement in a timely manner. This is critical, because existing weak laws don’t deter employers from refusing to bargain with newly formed unions — sometimes stalling the process and denying workers a contract for years.

It’s likewise long overdue for lawmakers to extend full union and collective bargaining rights to all, ending the racist occupational exclusions embedded in our labor law since the 1930s, which today leave millions of public sector, agricultural and domestic workers unprotected in many states.

Congress must also adequately fund the National Labor Relations Board (NLRB) so the agency can enforce labor law. Workers who are unionizing depend on the NLRB’s timely response to charges of employer violations or requests to schedule union elections. But flat funding since 2014 has translated to an effective 20% funding cut when inflation is factored in, and the agency has seen its staffing reduced by more than 30%, challenging its ability to keep up.

Meeting workers at the bargaining table

Many US workers say they want a union, but far too few have one. Right now, workers who’ve won recent union elections are inviting employers to meet them as equals and start bargaining union contracts. Rather than dragging out legal challenges and refusing to meet, employers should consider how collective bargaining with employees who are experts on their own jobs (and the customers, clients or patients they serve) can help improve their business.
To take one particularly heartbreaking example: One recent study found that during the first year of the pandemic, workers in unionized nursing homes were less likely to get infected with Covid than workers in non-union facilities. Meanwhile, the study found that residents of the unionized nursing homes were less likely to die from Covid than those living in non-union homes.

Labor unions are highly correlated with safer conditions because they give workers a voice in setting workplace policies and the ability to engage management in addressing concerns without fear of retaliation. At its best, collective bargaining over subjects ranging from training to production quotas, staffing, shift lengths, schedules, breaks, protective gear and more can lead to a contract resulting in both better working conditions and better customer, client or patient outcomes.

Committing to racial and gender equity

The Black-led, multiracial committees that have led organizing drives at Amazon warehouses and the young women baristas leading breakthrough organizing victories at Starbucks are changing the public face of the labor movement in powerful and promising ways.

Two-thirds of union workers are women and/or workers of color. Unions improve wages and benefits for all workers (not just those in unions) and reduce racial and gender wage gaps, helping to counteract disparate outcomes resulting from occupational segregation and discrimination in the labor market.

By contrast, many corporate diversity and inclusion efforts are ineffective, largely because they fail to address the underlying imbalances of power and don’t allow affected employees a voice in setting policies. Unions can help. The bargaining table presents employers with opportunities to hear workers’ honest assessments of problems and to craft contract language that reflects joint commitments to equity goals. In any company, the transparency and consistency of a union contract that sets wage rates, scheduled raises and procedures for promotions helps guard against forms of discriminatory bias that otherwise disadvantage women and workers of color.

Above all, employers should see this as a moment to learn from their workers, jettison wasteful and damaging union-busting operations, and fulfill their legal duty to bargain contract agreements with newly formed unions.

Unionizing workers will continue to need extraordinary solidarity, persistence and public support in order to succeed. This is a moment of opportunity for all of us. Anyone ready to start reversing the worst economic inequalities the US has seen in almost a century can choose now to join and support workers who are organizing unions.