Ukrainians Fight Russian Troops Up Close Along the Eastern Front 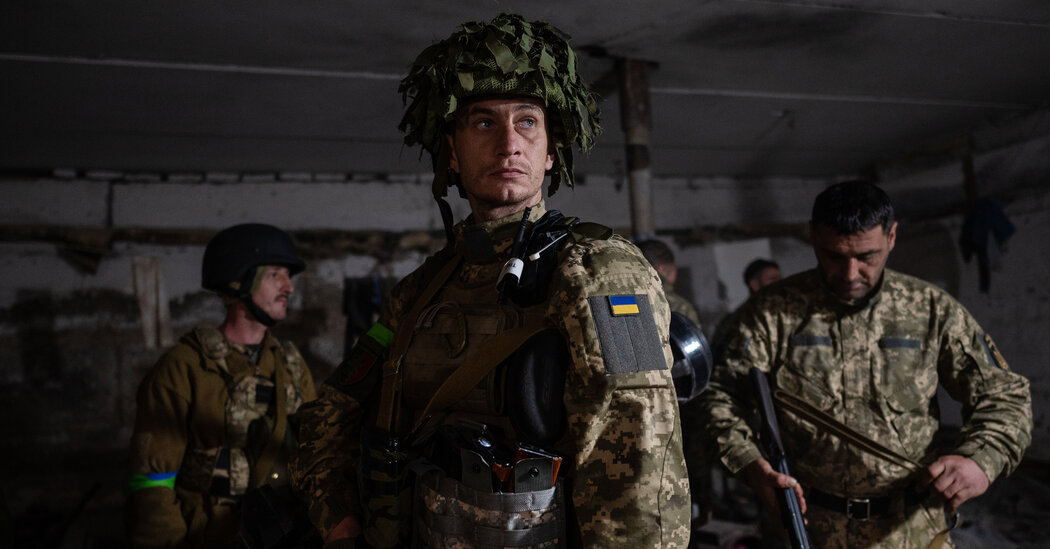 In some villages along the front, Ukrainian and Russian soldiers face off at close quarters, sometimes within eyesight of one another.

The impact of a tank round cracked the bunker’s plaster roof and sent uniformed men scrambling. Flak jackets and helmets were flung on and automatic weapons cocked. Amid a crescendo of machine gun fire, a tall soldier slung an anti-tank missile launcher over one shoulder and took a slow drag on his cigarette.

The Russians were close.

Fighting in eastern Ukraine has mostly occurred at a distance, with Ukrainian and Russian forces lobbing artillery shells at one another, sometimes from dozens of miles away. But at some points along the zigzagging eastern front, the combat becomes a vicious and intimate dance, granting enemy forces fleeting glimpses of one another as they jockey for command of hills and makeshift redoubts in towns and villages blasted apart by shells.

On Wednesday, one such dance played out as a Russian unit of about 10 men entered the village where soldiers from a Ukrainian contingent, the Carpathian Sich Battalion, had dug in. In all likelihood, the Russian troops were there to identify targets for incoming tank fire, including the round that jolted the Ukrainian soldiers into action. Ukrainian forces spotted the Russian soldiers and opened fire, pushing them back.

“It was a sabotage group, intelligence,” said a 30-year-old fighter with the call sign Warsaw, panting after the brief firefight. “Our guys were not asleep and reacted quickly, forcing the enemy to flee.”

So it goes every day, every hour, for the fighters of the Carpathian Sich Battalion, a volunteer unit named for the army of a short-lived independent Ukrainian state created just before World War II. Attached to the Ukrainian Army’s 93rd Mechanized Brigade, the battalion is deployed along a line of villages and trenched farmland in the Kharkiv region, assigned the task of holding back Russian forces pushing down from their stronghold in the occupied Ukrainian city of Izium.

The battalion gave a reporter and a photographer with The New York Times permission to visit a frontline position on condition that the precise location of their base not be revealed. Most soldiers agreed to identify themselves only by their call signs.

They have not faced an easy fight.

The Russian military has deployed an enormous force along this front in eastern Ukraine, bringing to bear its overwhelming superiority in tanks, warplanes, helicopters and heavy artillery.

The war machines rarely remain quiet for long. Tanks in particular have become a serious menace, fighters said, often coming within a mile of the battalion’s positions and wreaking absolute havoc. Already this month, 13 soldiers with the battalion have been killed and more than 60 wounded.

“It’s a completely different war than I’ve seen in places like Afghanistan or Iraq,” said a colonel who called himself Mikhailo. “It’s heavy fighting. Nobody cares about the law of war. They shell little towns, use prohibited artillery.”

Many of the battalion’s soldiers had experience in the eight-year war against Russian-backed separatists in eastern Ukraine, and had seen fighting in some of the conflict’s most intense battles. But most had been settled into civilian life for years.

One tall, bearded soldier with the call sign Rusin owns a business selling bathtubs in the mountainous region of Transcarpathia, in western Ukraine. But when Russia invaded on Feb. 24, he quickly married his girlfriend — he said he wanted someone waiting for him back home — and headed to war filled with a sense of mission.

“We understand that this is not a war between Ukraine and Russia,” he said. “This is a war of the pure and the light that exists on this earth, and darkness. Either we stop this horde and the world gets better, or the world is filled with the anarchy that occurs wherever there is war.”

Fighters from the battalion have taken up temporary residence in an underground warren beneath a building now perforated by artillery shells. The guns and ammunition boxes piled in corners are coated in the plaster dust that rains down each time a shell strikes nearby.

Other than soldiers, the bunker is inhabited by a menagerie of animals who have also sought safety from the bombs — several small dogs and black goat that likes to make a mess of the kitchen area. On Wednesday, Chevron, a very large German shepherd, was sleeping in front of a stack of American-made Javelin missile launchers, already out of their cases and ready to shoot.

The entire region rumbles with war. Low flying Mi-8 attack helicopters share the skies with fighter jets that steak across the countryside, occasionally setting off fires in the farm fields when they shoot flares to divert heat-seeking missiles.

The unit’s drone operator is Oleksandr Kovalenko, one of the few without a rifle. While his task is to help his comrades aim their artillery at Russian positions, he approaches his work like an artist, occasionally snapping and saving photos if the balance of light and shadow in the frame is to his liking.

On the ground. A Ukrainian counteroffensive near Kharkiv appears to have contributed to sharply reduced Russian shelling in the eastern city. But Moscow’s forces are making advances along other parts of the front line.

American aid. The House voted 368 to 57 in favor of a $39.8 billion aid package for Ukraine, which would bring the total U.S. financial commitment to roughly $53 billion over two months. The Senate still needs to vote on the proposal.

Russian oil embargo. European Union ambassadors again failed to reach an agreement to ban Russian oil, because Hungary has resisted the adoption of the embargo. The country is preventing the bloc from presenting a united front against Moscow.

He shows off an overhead shot of the surrounding farmland. It is verdant with spring growth, but pock marked like the moon from artillery strikes. As he scans the landscape, a patch of trees where Russian forces are positioned suddenly erupts in a fireball that dissipates into a mushroom cloud.

The battalion is a hodgepodge, with fighters from all over Ukraine and the world. There is Matej Prokes, a wispy 18-year-old from the Czech Republic who has “Born to Kill Russians” scrawled on the side of his helmet, but admitted somewhat bashfully that he had yet to do any shooting. Elman Imanov, 41, from Azerbaijan, was moved to fight against Russia after seeing the atrocities committed against noncombatants in Ukraine.

And then there is a 47-year-old soldier with the call sign Prapor, who is exotic even by the battalion’s standards. Born in Siberia, Prapor had a full career in the Russian military before retiring in the early 2000s, though he would not say where he fought. He joined the Ukrainian forces when Russian troops began shelling Kyiv.

“What can I say, they have studied well,” he said. “But the fact that they have begun killing peaceful civilians, looting, this is indecent.”

The battalion’s commander, Oleg Kutsin, said this diversity is part of his contingent’s ethos. When the original Carpathian Sich was founded in the 1930s, it welcomed anyone willing to fight and die under the blue and gold banner of an independent Ukraine, he said.

Not only are virtually any troops welcome, but equipment is as well, he said. In addition to the Javelins, troops fighting in the area recently received another gift to help them even the playing field: American-made M777 howitzers, a long-range artillery piece that the Ukrainians have been desperate to put into action.

“We wanted to resurrect this military tradition of the Ukrainian forces,” he said in his unit’s command center, where a desk was covered in maps of the region and a flat-screen television showed live footage of the smoky battlefield.

“They come,” he said, “we give them weapons and point them in the direction of the enemy.”