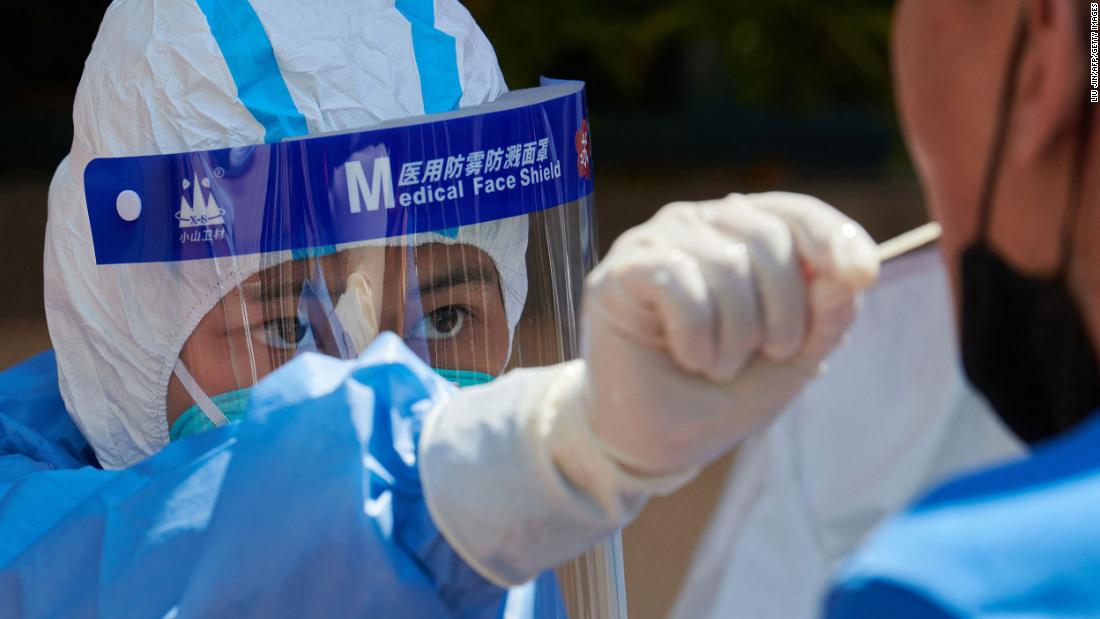 Three elderly people aged between 89 and 91 died from Covid on Sunday, after their condition deteriorated in hospital, the Shanghai Municipal Health Commission said in a statement Monday.

All three were unvaccinated and had underlying health conditions such as coronary heart disease, diabetes and high blood pressure, according to officials.

The city reported 2,417 symptomatic cases and 19,831 asymptomatic infections Monday, slightly down from the previous day, according to the health commission.

The death toll appears strikingly low against the vast number of cases — since March 1, more than 370,000 people in Shanghai have been infected, and by the official count, no one had died of Covid until Sunday.

In comparison, the region’s other financial hub Hong Kong has recorded nearly 9,000 Covid deaths out of 1.18 million total cases as of January this year.
Experts have attributed Hong Kong’s high death toll to its high proportion of unvaccinated elderly. As of early March, just 48% of people aged 70 or older had received two doses. And at the start of this year, just 25% of residents aged 80 or over had been vaccinated.

Shanghai’s low official death toll has raised questions among some experts outside mainland China, especially given the vaccination coverage among the elderly in Shanghai is not that much higher than that of Hong Kong.

On Monday, Shanghai officials said 62% of the city’s residents aged over 60 had been fully vaccinated, and 38% had received a booster shot. The number of fully vaccinated people aged over 80 was even lower, at just 15%, according to the Communist Party mouthpiece the People’s Daily.

Jin Dongyan, a virologist at the University of Hong Kong, said Shanghai’s low death toll is partly a result of how Covid deaths are counted in mainland China.

“The methods used by Hong Kong and the mainland to calculate deaths are completely different. Over 90% of the Covid deaths reported in Hong Kong will not be counted on the mainland,” he said.

In Hong Kong, a person is counted as having died of Covid if they were confirmed to have contracted the coronavirus less than 28 days before their death — even if they died of suicide or road accidents, Jin said.

“On the mainland, if the deceased had underlying ailments, most of them would be categorized as having died of other diseases instead of Covid,” Jin said.

In Shanghai, the number of officially designated severe cases is also low. According to Wu Jinglei, director of the Shanghai health commission, only 16 severe cases were being treated in hospital as of Saturday. “One of them has been fully vaccinated, the rest were not vaccinated against Covid-19,” he said.
Chinese health officials have noted the high proportion of asymptomatic and mild cases in the country’s Omicron outbreak. Wang Guiqiang, an infectious disease doctor in Beijing, said at a government news conference on April 6 that that was because the Omicron variant is less virulent, people are vaccinated, and that active testing has detected many cases early, during the incubation period. But Wang cautioned that Omicron is still dangerous for the elderly, especially those who haven’t received full vaccination.

This is only the second time mainland China has reported Covid deaths this year. Last month, the northeastern province of Jilin reported two deaths — the first in more than a year. Throughout 2021, mainland China reported only two Covid deaths, both in January.

Chinese officials and state media have attributed the country’s low death toll to the supposed success of its zero-Covid strategy, often contrasting it with the hundreds of thousands of deaths reported in Western countries.

But increasingly, the low official death toll is also raising questions among many Shanghai residents over whether it is justified to impose the kind of stringent measures that have upended the lives of millions of people.

The reported deaths come as the metropolis of 25 million people continues to endure a grueling lockdown, which has ground the vibrant, bustling business hub to a virtual halt.

Residents have been confined to their homes for three weeks and counting, with many complaining of food shortages, lack of medical access, poor conditions at makeshift quarantine camps and heavy-handed measures such as separating infected children from their parents.

On China’s heavily censored social media, users have resorted to creative ways to express growing discontent toward the prolonged lockdown, including posting under seemingly irrelevant hashtags that deliver veiled criticism or sarcasm. But those hashtags are often censored too after they draw widespread attention.

On Sunday, the latest censored hashtag on Weibo, China’s Twitter-like service, is the first line from China’s national anthem: “Stand up! Those people who refuse to be slaves!”