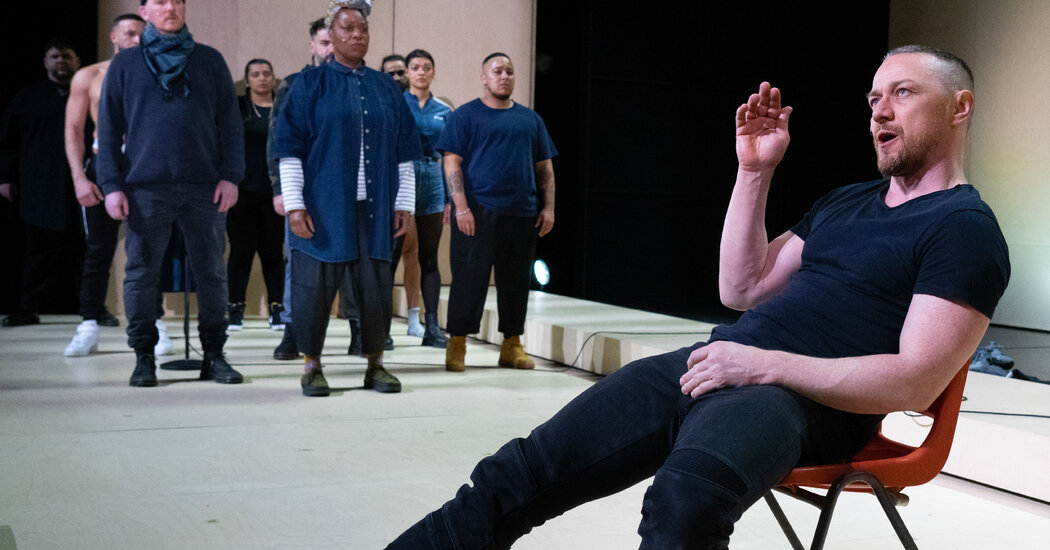 At any rate, one is fain to cry — because that’s unfortunately how the title character of “Cyrano de Bergerac” is usually introduced, both in the play’s first English translation, a year after its 1897 Paris premiere, and more or less ever since.

But in the version that opened at the BAM Harvey Theater on Thursday, “freely adapted” by Martin Crimp — so freely it almost amounts to a new play — the flowery phrases and antique diction of Edmond Rostand’s Belle Époque verse drama, at least as typically rendered in English, are finally fully swept away. Cyrano is now introduced rather differently:

“They say when he came through his mother’s vagina/the nose poked out first as a painful reminder.”

This is not your grand-mère’s “Cyrano.” Replacing Rostand’s stately 12-syllable alexandrines with jumpier rhythms, its euphemisms with plain speech and its perfect rhymes with ones so slant they serve as italics, Crimp rockets the action to a world drunk on language as it’s actually spoken. It’s also a world in which, as the baker Ragueneau (now a poet, too) predicts, “There’s going to be a new force of words.”

Is there ever! Which is but one of the reasons this production, superbly directed by Jamie Lloyd and starring James McAvoy in an almost literally ravishing performance, is a triumph. Another is that new words reveal new people.

Yes, the central story still takes the same triangular shape you may recall from Broadway revivals (14 since 1898), film adaptations (like the 1987 Steve Martin movie) and at least four musicals (including the current one starring Peter Dinklage). The beautiful Roxane still falls in love with the hunky, barely verbal Christian, who in order to satisfy her lust for poetry relies on Cyrano to script his wooing. And Cyrano is still in love with Roxane, though he never risks saying so because of that protuberant proboscis.

But in none of the many versions I’ve seen, even the good ones, has the story seemed alive or its characters fully human. The arch verse no less than the ruffs and pantaloons too often turn Cyrano into a preening fop, which is exactly what he isn’t. Roxane, trapped in her farthingales, has no sex or agency; Christian no emotion save what Cyrano provides. As their friends and followers and even their enemies melt into an indistinguishable mass of ribbons, watching the play usually feels like a historical pageant, or a three-hour animatronic exhibition at Versailles.

There is nothing historical or animatronic in Lloyd’s production. The action, though still set in 1640, simultaneously takes place anytime and now. (The Thirty Years’ War of the 17th century and the Algerian Revolution of the 20th are both ongoing; the ambient sound is both French Baroque and beatbox.) The stripping of the characters’ speech is matched by Soutra Gilmour’s minimal design: blond wood platforms for the set, costumes you’ll think you saw in Greenpoint last night. There are no quill pens, no plumes, no props.

Which is to say, no prosthetic one. We are asked to consider not only what ugliness means and where in a human being it resides, but how a play about words must put its faith in them. Thus this telling has the rough-hewed realness of something being made up on the spot, which, as it happens, is one of Cyrano’s greatest skills. Only now, when he swordfights while improvising a poem, the poem is as percussive as a rap and the sword is merely a hand mic.

Wielded by McAvoy, both are astonishing weapons. In his take on the role, Cyrano’s passion is almost secondary to a manic sense of entitlement, partly in response to his physical self-hatred (a bit of a stretch with McAvoy, but let’s allow him his private demons) and partly in response to what he has described, in an interview with Laura Collins-Hughes in The Times, as the production’s interest in “toxic masculinity.”

It is therefore not incidental that McAvoy, who first played the role in an acclaimed London run interrupted by the pandemic, brings with him a cloud of superhero intensity from movie roles like Charles Xavier in the “X-Men” series. For the first time in any version of “Cyrano” I’ve seen, the character’s improvisatory brio, his comradeliness, his violence and even his scheme for seducing his beloved by proxy are all tied together in an unpretty package. When at one point he thinks Roxane has summoned him to proclaim her love, his face flushes red with joy; it’s the same red we see in his rages.

I don’t mean to diminish the production’s emphasis on beauty, but it’s a more complicated kind of beauty than we’re used to. The scene in which Cyrano ventriloquizes for Christian has never felt so erotic, not only because of Cyrano’s rapture in delivering it but also because of Roxane’s in receiving it. As reimagined by Crimp, and played by the stunning Evelyn Miller, Roxane is fully independent of mind, even if not of income; she is frankly sexual, gleefully manipulative, flattering men’s privilege but always seeing through it. Needless to say, in this version, she does not wind up in a convent.

Nor is Christian (Eben Figueiredo) the toy soldier of most productions. As his dependence on Cyrano grows, his reluctance and confusion do too. These lead to a shocking moment that nevertheless seems completely natural — and even necessary, completing the triangle.

That and some other major changes to the story may feel like gimmicks to purists. They may also object to the Babel of accents bending the vowels and smearing the consonants in a play about speech.

Not I: McAvoy’s neck-tingling burr, and all the other sounds made by the wonderfully diverse cast, including Michele Austin as the regendered Ragueneau and Vaneeka Dadhria as the bubbly beatboxer, reopened my ears to a story I knew too well. If I was stopped now and then by Crimp’s more mystifying conceits — a Borscht Belt envoi? — I spent most of the production’s swift two acts fully engaged in its humor, pathos and fury.

And mostly its besottedness with words. This is a world in which Cyrano can say “my role/is bare my soul/then crawl back into my lonely language-hole,” making you hear his hopelessness in its fitful line lengths. It’s a world in which “I’ll rip his tongue out” is a curse worse than death. Wouldn’t you like to live there?