In Besieged, Broken Mariupol, Ukrainians Vow a ‘Fight to the End’ 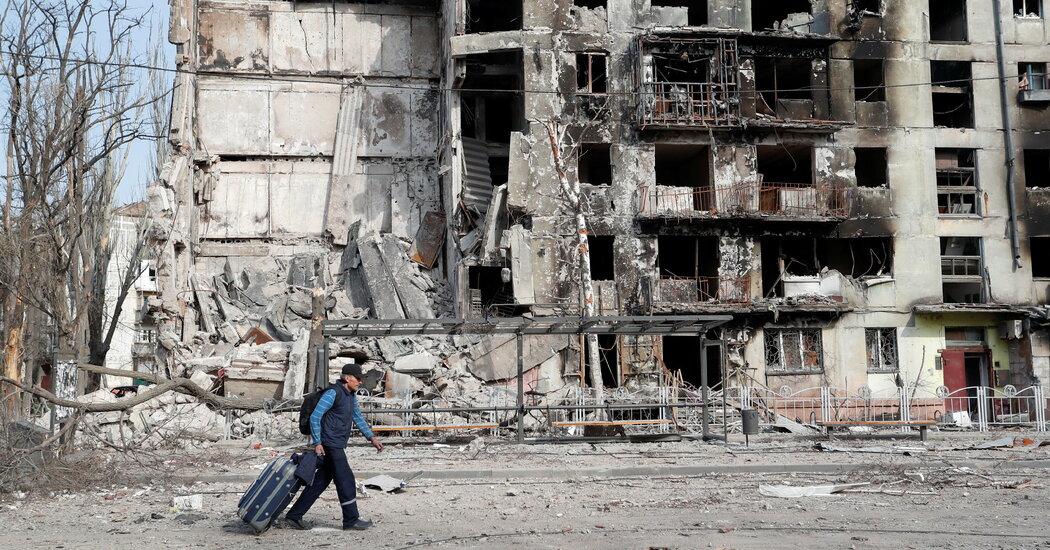 KYIV, Ukraine — After weeks of shelling and bombings, the Russian siege of the critical Ukrainian port city of Mariupol has culminated in a last stand by a few thousand Ukrainian troops, holed up in a sprawling, smoldering steel plant that backs up to the sea.

Russia had given the Ukrainian fighters in Mariupol until Sunday morning to lay down their weapons or be “eliminated.” On Sunday, the forces at the plant ignored the deadline, and Ukrainian officials vowed that they would not surrender. In response, the Russian assault intensified, with missiles and bombs hitting the city and new attacks occurring near the plant, according to the Ukrainian military.

The showdown at the Azovstal steel plant, near Mariupol’s port, has become the last line of Ukraine’s defense in preventing Russia from securing a strategically important land bridge between its stronghold in Crimea and eastern Ukraine, which Russia has been struggling to control. Capturing Mariupol would be a major victory for Russia that could strengthen its push to command Ukraine’s east, cut off an important Ukrainian port and bolster flagging morale among Russian troops.

But Ukrainian officials said on Sunday that the struggle was not over for Mariupol, which for two months has tied up Russian troops and resources that are badly needed elsewhere.

“The city still has not fallen,” Denys Shmyhal, Ukraine’s prime minister, told ABC News on Sunday. “There is still our military forces. So they will fight to the end, and as for now, they are still in Mariupol.”

Taking Mariupol would be one of the first major victories for Russia over the past several weeks, a period in which it withdrew from the area around Kyiv, Ukraine’s capital, and lost one of its most important warships, the Moskva. The Moskva’s sinking drew fierce reaction in some corners of the Russian news media, which called for harsh retaliation. Russia has recently shifted its focus to eastern Ukraine, and on Sunday, it continued to unleash missiles into Kharkiv, Ukraine’s second-largest city after Kyiv, in the country’s northeast.

In Mariupol, in the southeast, it was unclear how many Ukrainian troops were still fighting. Russian officials said there were 2,500 soldiers aligned with Ukraine at the steel plant, including “400 foreign mercenaries.” President Volodymyr Zelensky of Ukraine told news outlets on Saturday that getting accurate numbers out of Mariupol had been difficult, because “many people have disappeared.” But he said that Ukrainian officials believe Russian troops outnumber the Ukrainian forces in the city by six to one.

One of the groups leading the defense of Mariupol is the Azov Battalion, a unit of the Ukrainian National Guard that has drawn far-right fighters from around the world. Moscow has used the presence of far-right movements in Ukraine as a pretext for invading the country. Russian troops also include many far-right fighters.

Mr. Zelensky said that Ukrainian officials were speaking with the soldiers at the steel plant several times a day. “We support them as much as we can,” he said. “But they know that they are carrying out one of the most powerful and important missions today.”

Azovstal Iron and Steel Works is one of the world’s largest metallurgical factories and is run by Metinvest, a steel and mining conglomerate owned by the billionaire Rinat Akhmetov, Ukraine’s richest man. The plant, stretched over more than four square miles, is a maze of rail tracks, blast furnaces and industrial mills. A military official aligned with Russian forces has called the plant a “fortress in the city,” according to Reuters.

Communications systems have been destroyed across Mariupol, making it hard to speak with soldiers at the plant or others in the city.

Russia’s deadline on Sunday raised concerns of further carnage in Mariupol, which before the war was a thriving port city on the Sea of Azov, an extension of the Black Sea, and home to roughly 450,000 people. Mariupol has been under near-constant bombardment since late February, including bombings of a maternity ward and a theater that was being used as a civilian bomb shelter, and many parts of the city have been destroyed.

Mr. Zelensky said that Russian attacks had already killed tens of thousands of people in Mariupol and that more than 100,000 people remained trapped there with little access to food or water. He vowed on Saturday to halt all peace talks with Moscow if Russian forces committed further atrocities there. Russia “is deliberately trying to destroy everyone who is there,” he said.

For more than a month, Russians have blocked humanitarian convoys taking food and medicine to Mariupol, exacerbating the crisis there, said Lyudmyla Denisova, Ukraine’s human rights ombudsman. Russian forces who control much of the city are giving residents just a loaf of bread and bottle of water each day, she said, and starting on Monday, they will begin requiring residents to have special permits to leave their homes.

The United Nations has called for Russia to enable civilians to flee Mariupol, so far without success. Ukraine’s deputy prime minister, Iryna Vereshchuk, said on Sunday that talks with Russia on a cease-fire along civilian evacuation routes had failed. “That is why, unfortunately, we are not opening humanitarian corridors today,” she said in a statement.

Yet the governor of Luhansk in eastern Ukraine, Serhiy Haidai, still encouraged people across the region to evacuate on scheduled trains and buses. “Hurry to save yourself while we can help you,” he wrote in a post on Telegram.

Russia’s new focus on Ukraine’s east suggests that Moscow wants to secure full control of the vast region along its border as a tangible sign of success. Crucial to that strategy will be taking Mariupol in the Ukraine’s southeast and Kharkiv in the northeast.

Over the weekend, Russia continued its bombing of Kharkiv. A rocket barrage slammed into central Kharkiv on Sunday, setting apartment buildings and a market on fire. The attack left at least five people dead and 13 wounded. On Saturday, Russian missiles hit near José Andrés’ World Central Kitchen operation in the city, wounding four people working for the nonprofit group.

The organization, which creates community kitchens in places struck by natural disaster or conflict, said on April 4 that it had delivered nearly 300,000 meals in Ukraine, including to bomb shelters, hospitals and churches.

Despite Russia’s military might, Ukrainian forces have continued to have success defending their country. Last week, two Ukrainian Neptune missiles struck and sunk the Moskva, a warship that was the pride of Russia’s Black Sea Fleet and that had been used to launch cruise missiles deep inside Ukraine. It was one of the biggest naval losses anywhere in the world since World War II, and it prompted new questions within Russia about what was happening across the border.

Russia said the ship sank because of an accidental fire, while Ukrainian and American officials credited the Ukrainian missiles. The ship had more than 500 personnel, but the death toll was unclear. Days after the Moskva sank, Russia’s Ministry of Defense released a video that purported to show dozens of uniformed crew members still alive.

On Saturday, Vladimir Solovyov, the host of a popular prime-time talk show in Russia whose pronouncements often reflect the Kremlin line, began asking what went wrong. If the ship caught fire before sinking, as the Russians assert, then why did it not have a system to extinguish such blazes, Mr. Solovyov wondered aloud. If the ship was sunk by two Ukrainian-made Neptune missiles, then why did it lack an antimissile system?

“Just explain to me how you managed to lose it,” Mr. Solovyov asked rhetorically on his Saturday program, “Solovyov Live.”

The segment was unusual not least because Mr. Solovyov broached the idea that Ukraine had managed to sink the Moskva. It comes as more pundits and others on television in Russia have started referring to the fighting in Ukraine as a “war” — although they have tended to use the term when suggesting that the whole of NATO, including the United States, is ganging up on Russia. They do not describe Russia’s invasion itself as part of a war, nor do they mention that the Kremlin started it.

The Kremlin has squelched open discussion of the conflict by promulgating a law in early March that criminalized spreading any “false information” about what Russia calls its “special military operation,” including calling it a war, with violators facing up to 15 years in prison.

While carefully scripted television news programs still use the “military operation” formula, guests in the heat of the shouting that is a trademark of Russian TV talk shows often yell about “war.”

The even angrier tone than usual, when discussing the sinking of the Moskva, indicated that many commentators found Ukraine culpable. Skipping the official explanation that it caught fire, for example, Vladimir Bortko, a film director and former member of the Duma, Russia’s Parliament, said last week that the assault on the vessel should be treated as an assault on Russia itself.

“The special military operation has ended; it ended last night when our motherland was attacked,” he said. He suggested that possible responses included bombing Kyiv or the transportation networks that allowed foreign dignitaries to visit — or something even more sinister: “Bomb them once and that is it.”