Bucks bounce back after blowing big lead to beat Bulls 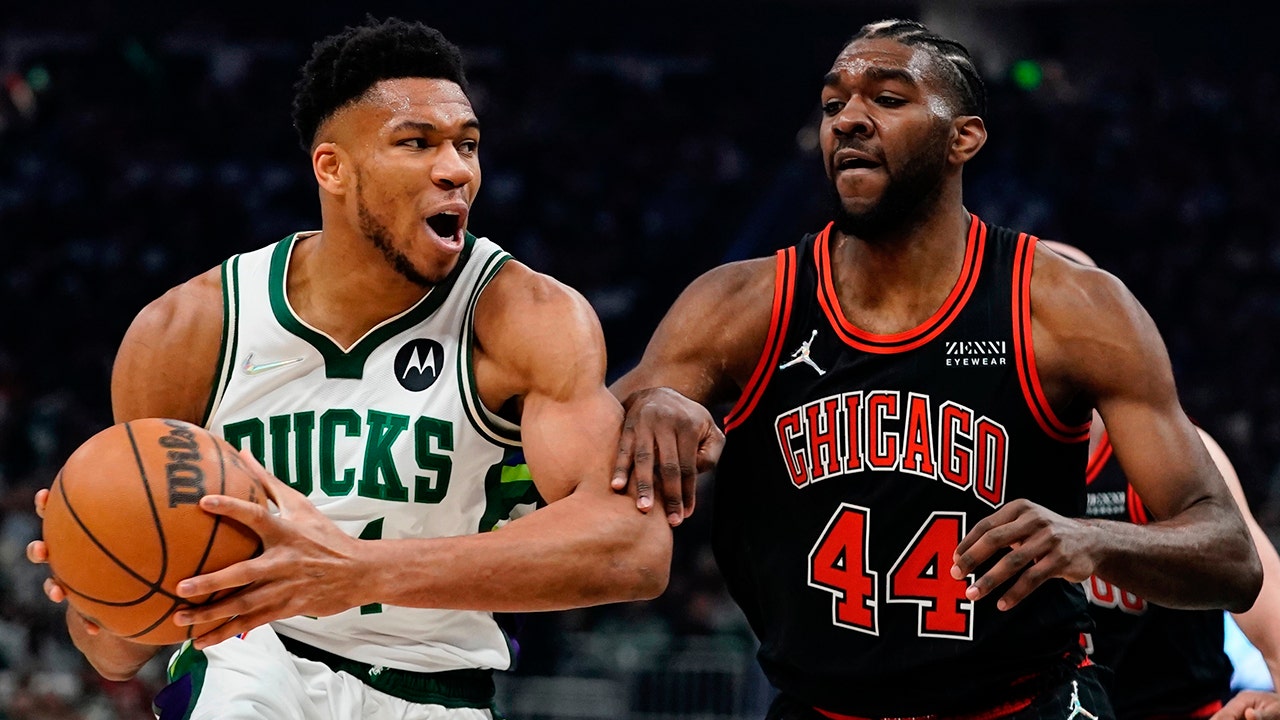 Giannis Antetokounmpo had 27 points and 16 rebounds, and the defending champion Milwaukee Bucks recovered after blowing a 16-point lead to beat the Chicago Bulls 93-86 in Game 1 of their first-round playoff series Sunday.

Jrue Holiday sank a go-ahead 3-pointer with 5:03 left as part of an 8-0 run that gave the Bucks an 85-78 edge. The Bulls got the margin down to one but could never regain the lead, as Zach LaVine missed a potential tying 3-pointer from nearly 30 feet away with 29 seconds left.

The Bucks have won 17 of their last 18 meetings with the Bulls, including all five matchups this season. The Bulls’ lone victory during this stretch came in the 2020-21 regular-season finale when the Bucks rested all their starters.

Milwaukee Bucks’ Giannis Antetokounmpo tries to get past Chicago Bulls’ Patrick Williams during the first half of Game 1 of their first round NBA playoff basketball game Sunday, April 17, 2022, in Milwaukee.
(AP Photo/Morry Gash)

Milwaukee kept that pattern going Sunday by holding Chicago to the lowest single-game point total of any Bucks opponent this season. But the Bucks also continued their habit of struggling in opening games of series.

The Bucks won last year’s title despite dropping Game 1 in three of their four series. They had lost the opening game in five of their last six playoff series before Sunday, the exception coming when Khris Middleton hit a 3-pointer in the final second of overtime against the Miami Heat last season.

Nikola Vucevic had 24 points and 17 rebounds for the Bulls, making their first playoff appearance in five years. LaVine had 18 points and 10 rebounds. DeMar DeRozan had 18 points, eight rebounds and six assists.

After the Bucks grabbed an early 32-16 lead and threatened to put this game out of reach early, the Bulls chipped away and finally pulled ahead by scoring 13 straight points late in the third quarter. Coby White scored the last five points of the run, including a 3-pointer that gave the Bulls their first lead at 67-64 with 3:11 left in the third.

White’s layup made it 69-64, but the Bucks ended the third quarter with a 10-2 spurt to pull back ahead.

Vucevic’s inside basket put Chicago back ahead 78-77 with 5:56 left. The Bucks regained the lead on Holiday’s 3-pointer, which was just Milwaukee’s second basket of the fourth quarter.

Lopez made it 83-78 with 4:34 left by converting a three-point play for his first points since the opening period. Holiday capped the 8-0 run by sinking a jumper with 3:58 remaining.

GOING BACK TO CHICAGO

With the two cities separated by only about 90 miles, the Bulls are heading back to Chicago after Game 1 before returning to Milwaukee for Wednesday’s Game 2.

“If we would have had to play Sunday-Tuesday, I think we would have definitely stayed here,” Bulls coach Billy Donovan said before the game. “But I think because we have two days, we have a chance to get home at a decent time, those guys can sleep in their own bed, practice tomorrow, practice Tuesday and then come back up.”

Bulls: Caruso was in the starting lineup. Caruso had started just 18 of the 41 regular-season games he played. … The Bulls were missing assistant coaches Chris Fleming and Damian Cotter, who had tested positive for COVID-19. “They’re still in protocols right now with the league,” Donovan said before the game. Donovan added that “they have never really been in a situation where either one of them has felt bad at all, so that’s been a positive.”

Bucks: Reserve guard George Hill (abdominal strain) and reserve forward Jordan Nwora (back soreness) were unavailable for Sunday’s game. Hill also was held out of the Bucks’ regular-season finale. … This is the Bucks’ sixth straight playoff appearance, which matches their second-longest such streak. They reached the postseason 12 straight times from 1980-91.

Game 2 is Wednesday in Milwaukee.